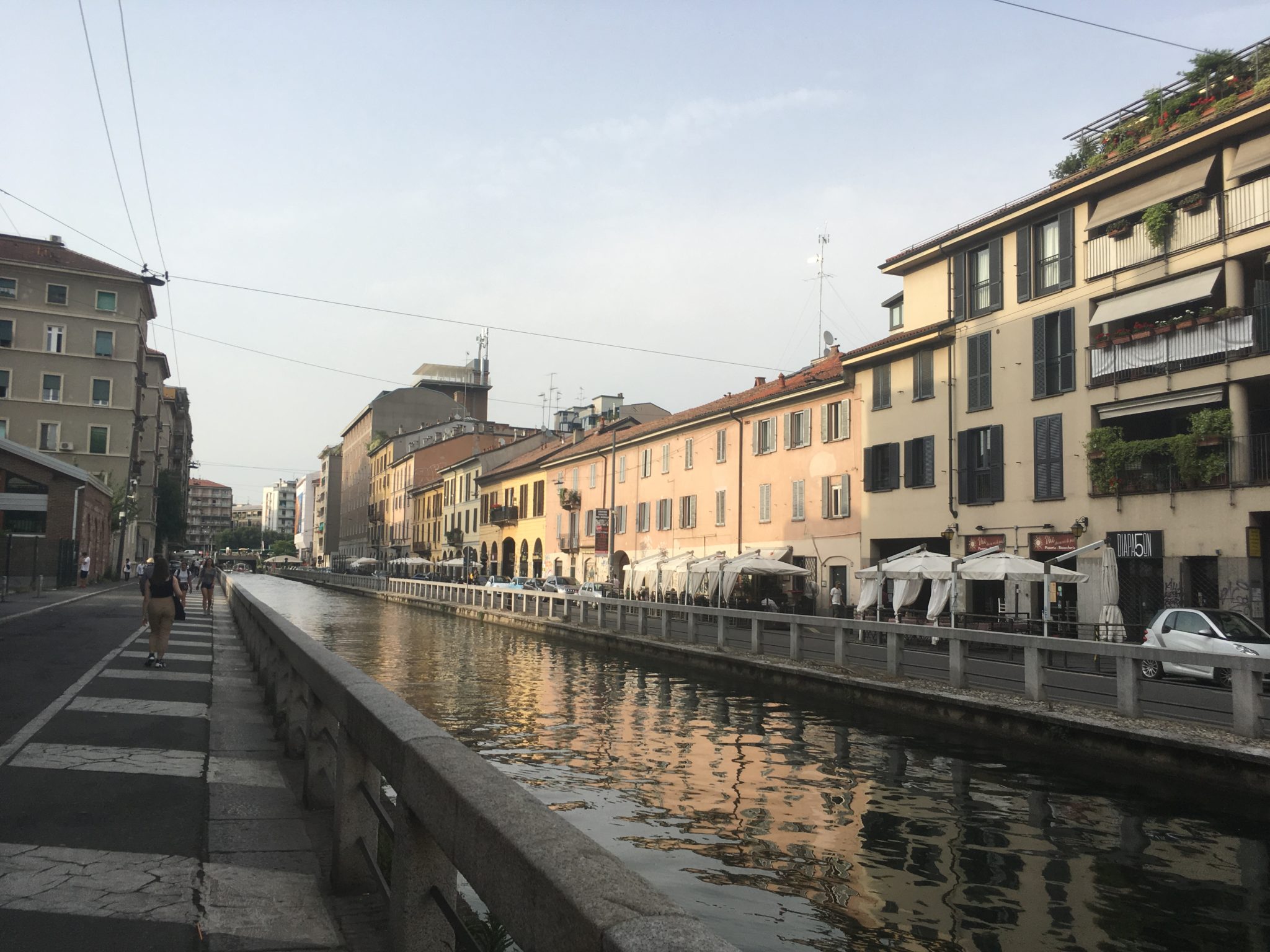 If one is heading to Italy, it is likely he or she will be either going to Rome or Milan. Milan or Milano is the second largest city in Italy and a global capital for business, art, and fashion. It is significantly larger than Turin and really any other city in the region, which makes it a major draw for tourists and immigrants looking to get ahead.

Milan has been on my radar for awhile, so I was more than excited to end my solo-backpacking with this lively and stimulating city.

Upon arriving at the central station, I was taken back by how busy the city was and also hot. In the summers, Milan can reach temperatures of 31°C or 88°F. Air conditioning is a must for accommodation. Without it, good luck sizzling.

The city is as expansive as it is expensive too. Littered with canals, bridges, and alleyways, Milan is walking-friendly, but the metro system comes in handy more often than not. To get to more residential areas, one needs to be take the subway and usually use one or two connections.

Tickets are rather cheap and necessary to enter and exit the stations. This is not the city to try to cheat the metro system. Far too glamorous to hop the turnstiles.

Myself, I stayed in the south of the city, by the navigli (canals). This neighbourhood caters to a younger crowd with bars, shops, and restaurants along the canals’ edges. For a decent meal and fun night out, this area is the one to visit.

When I arrived to Milan, my host on Misterb&b informed me that it was in fact, fashion week (June 14th-17th, 2019). Well, a fashion week. In a city like Milan, these events are so regular, it is not a big deal for locals. However, for tourists like yours truly, it is pretty cool to be in a city during such a period.

As I was only in Milan for about 3 days, I had not planned much other than window shopping (at the Galleria Vittorio Emanuele II) and eating (everywhere). Milan was the departure point for Nina (Croatian goddess and go-to backpacker) and I to head to Cyprus and later Turkey. I am not a super fashion minded individual, but I was looking forward to the buzz that a city like this would have during this time.

In fact, at a Couchsurfing hangout, I met an aspiring model from Serbia who came down for the events to try to land a gig. He lamented to us about the struggle it really was to book anything.

Imagine showing up to an audition with 100+ other beautiful, tall individuals then getting 30 odd seconds to make your mark. And, that is it.

Of course, the glamour and glitz are all relative. Meeting up with a Parisian traveller one evening, he complained to me how backwards Milan (and in extension, Italy) was. Of course, this comparison was in relation to his beloved Paris, France. With a special smugness, he remarked how fashion week was rather boring for someone from a major city … It was not a delightful or balanced conversation to say the least.

The ambiance however during with interaction was certainly enjoyable. We sat along the navigli by the Darsena with almost everyone else in Milan for a drink and chat. This area becomes extremely popular during the afternoons and evenings, so go early to start the night.

Furthermore, bring your own drinks. Do not buy them next to the water.

As I mentioned, Milan is expensive. Do not pay upwards of 7 euros for a beer. Nope.

So, while drinks are taken care of, what about eats?

Being in Italy, Milan has its own rich gastronomy that differs from its regional cousins. In fact, Milanese cuisine is rather divergent from the stereotypical Italian palette that one might assume is universal.

Do not expect that much pasta or tomato-based dishes. Instead, prepare for more hearty meats, rices, and corn-based delicacies. Polenta, risotto, and ossobucco are commonplace in the minds of many a Meneghino (person from Milan) for what makes their city special.

Along the canals, there are many older, eclectic restaurants that cater to tourists and locals alike with traditional and fusional takes on dishes. Two of my favourites are Trattoria della Gloria and Da Giulio, which are on opposing ends of the area.

I had the ossobucco at the trattoria and cotoletta (Milanese schnitzel) at Da Guilio. Both classic dishes, which will cost a bit, are worth it and come in huge portions.

Closer to the Duomo, the main cathedral and tourist destination in Milan, there are smaller eateries and more upscale establishments too. However, for the many business people in the region, a quick piadina (flatbread sandwich) is all one needs.

The small shops that sell them get extremely busy during midday, but are the best place to grab a bite.

Prepare to speak Italian – or at least try to – it keeps with the flow of the establishments. Especially since the organisation inside them is confusing. One usually has to order at one counter, then pay at another or something similar to this dynamic at multiple stations inside these 55 square meter or so delicatessens.

I cannot remember for the life of me what the eatery I stopped in was called. But, there are many that litter the streets throughout Milan, and if one is looking for a piadina, Italy should not disappoint in general.

At the Duomo itself, keep your belongings guarded and be aware of the venders and pickpockets. The area is inundated with people daily, which makes it a perfect place to swindle unsuspecting tourists.

A friendly Macedonian woman and I helped each other out with getting the perfect photos in front of the cathedral. It is the largest cathedral in Italy (excluding the Vatican’s own) and impressive to behold in size and its Gothic intricacies.

Queueing to enter it can take some time during the high season. Also, book additional site tickets beforehand online and plan out the day around these attractions. The various passes one can buy allow entry to the adjacent, related sites as well as specify one of the various ways one should ascend the cathedral, depending on the purchased package.

As I did not plan ahead/am never as infatuated by churches as others, I did not enter. I just braved the pigeons and crowds in the plaza.

Overall, Milan is a must see for those obsessed with Italy and fashion and the arts in general. Aside from the wearable, masterpieces by Leonardo Da Vinci, Caravaggio, and Michelangelo reside in the some of the many galleries and museums in the city.

Of course, as it is 2019, there is an equally exquisite modern art scene in the city too.

Experiencing Milan for the first time is something special. As a result of its size and place globally, all types of people come here for vacation, work, and for any other reason one can fathom.

However, in this respect, some too may consider it overly busy compared to the smaller cities around it (like Turin). The quintessential Italian ambiance is arguably present. However, once a city is big enough, it loses a bit of its regional charm and becomes its own entity entirely.

I call this phenomenon the Berlin effect: when a large city becomes simply European. I think Milan is similar in this respect. One can still get a delicious granita and gelato at a cute caffè (I recommend Gelateria Orsi Sas Milano on Via Evangelista Torricelli), but the peace they bring may feel short-lived entering again in the rush of the city.

Leaving Milan on the Terravision bus outside the main central station, I was sad to say goodbye to such an interesting, alluring place. Having stayed with an immigrant from South America and met many others who have made this city their own, I wondered what life would be like if I were to move to such a famous metropolis.

I will likely never know. I doubt Italy is in the cards for me in regards to permanent residence. But, a boy can dream. And, plan to live it up in style next time I am in this artistic, commercial mecca.

I am so late on so many posts. We are now just getting to Cyprus and Turkey! Wow, it has been a quick summer. My final year at university begins this week, and I adopted a wee dog a few days ago too. So, my life is truly picking back up in Vancouver. I hope you all are ready for many posts about this vibrant city, Canada, and other North American happenings after a few more posts on the marvelous Mediterranean region.