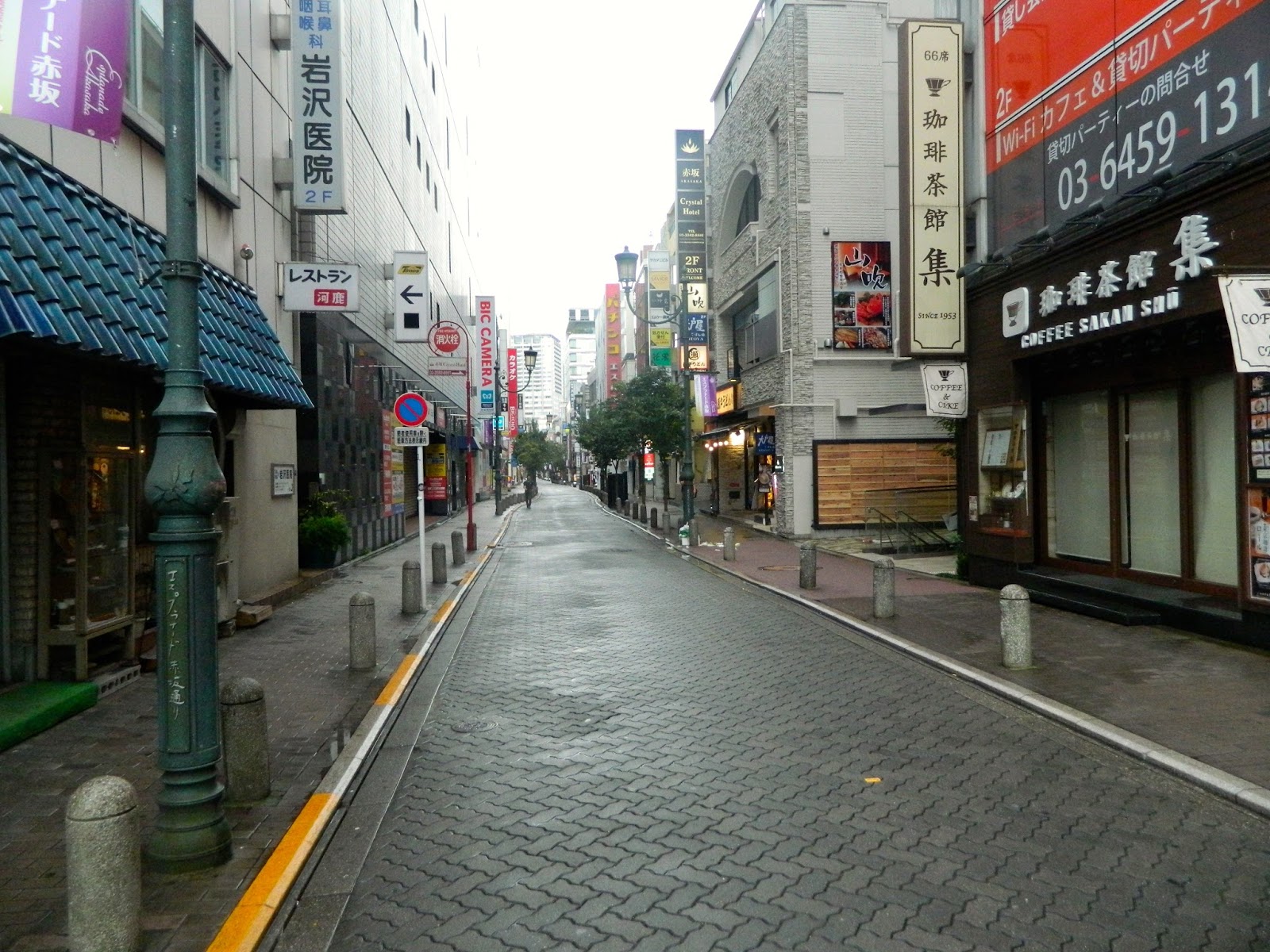 I really like Tokyo in the rain. It is simply serene.

I woke up at around 6 AM and decided to take a stroll around Chiyoda. However, the rain brought me back in after around an hour. Luckily, cheap umbrellas are common for sale items around the city, so I was not bested yet again by the weather. Also, I live in Vancouver; rain means nothing to me now.

After a lovely Japanese breakfast, my father and I ventured out to the Imperial Palace and Garden. Taking the Muranouchi red line once again, it was an easy stroll to the massive historic complex from the Ōtemachi station.

Admission is free to the Imperial Palace, and as a result of today’s rain, tourists were relatively sparse. It is a little harder for pictures, but a rainy Tokyo is its own experience that I recommend. Definitely do not let the weather get you down, cities can change for the better.

An organized guided tour is not necessary as post markers are common throughout the grounds, giving insight to this beautiful fortress and residence for the Imperial family. Built upon an Edo era castle with later construction in the Meiji period, the modern Imperial Palace is a tourist must see.

Within the complex, there are smaller attractions (and some large ones — like a music hall) and museums including a calligraphy exhibit, highlighting the long standing literary history of Japan. Staff members are abundant and will enforce the etiquette and guidelines in these areas. No cellphones or photos inside the calligraphy museum, people!

However, the real charm of the palace is its massive gardens and green spaces. Buildings and ceremonial halls once occupied some of them, but unfortunately, they burned down after their arduous completion in the 19th century. However, the lower structures that housed the samurais still remain intact.

Enjoy the quiet pathways through the forests and honestly just wander. And although it might be tempting, I do not think you can pick from the Imperial fruit trees. I would not suggest testing my theory and trying to harvest either.

Traditional gardens are found throughout the city and possess idiosyncratic qualities, including minimalistic arrangements: an endemic style from the archipelago. I would say (with my untrained eye) the gardens of the Imperial Palace are perfect examples for those curious about what makes this style of garden so special and coined as “Japanese” around the world by its imitators and admirers. Simple bridges, some koi, and relaxed, stylized topiary bring it together.

Upon entry, one receives a token that functions as your ticket. It has an expiration time, so be sure to leave before the Imperial Palace closes off to the public. This remark might sound obvious, but I cannot stress how magnificent and immense the palace is. If it did not start pouring, we definitely would have stayed longer to savour the natural scenery in downtown Tokyo. What a juxtaposition!

After crossing over the imperial moat once more and asking a local policeman for some assistance, we took the JR (Japan Rail) train to Shibuya to get to the famous Shinto Meiji Shrine. But first, we had to pass through modern Tokyo … and the iconic Shibuya crossing.

A recommendation from my Japanese wonder woman, Yuuka, the Shibuya crossing is a famous, bustling crossroads known for its massive migrations in Shibuya of course, another ward of Tokyo: a hip, commercial area of the city. The best photos are taken from the Starbucks directly across the street from the Shibuya metro station.

Not surprisingly, Shibuya is host to far more tourists, and the Starbucks is everyone’s mothership. I spoke Spanish with someone there. Surprise!

Close by rests the Meiji Shrine, a socio-religious attraction and green enclosure, that stands to honor the late emperor Meiji and his wife’s spirits. Like the Imperial Palace, the Meiji Shrine is a massive enclosure filled with forested areas and gateways. Wide unpaved pathways are subject to hordes of tourists and locals alike who have come to see the traditional ceremonies and pay their respects in this spiritual place. The namesake shrine is located within this lush section of Shibuya, and one can stumble upon other cultural sites including heritage museums and art instillations within his or her trek to the iconic Shinto structure.

Shinto, if not already stated, is a unique religion from Japan, featuring an abundant pantheon of deities and spirits with intricate rituals featuring priests and its own liturgy.

There is some procedure that visitors and locals alike should pay attention to. When entering a gate, it is customary to bow. When at the Meiji shrine itself deeper in the forest, one may choose to throw some coins into the grated area, but all should bow twice, then clap twice, and then finally bow again in respect if they choose to observe the structure up close. Additionally, no photos should be taken.

An additional practice includes the water well-like stations with ladles. We did not personally partake, but one using them should respectfully rinse his or her left hand, then rinse the right, pour water into the left hand and clean one’s mouth. After, one should rinse the ladle itself and set it down. It is an interesting practice, but if you are to take photographs, just don’t get in anyone’s way who wants to wash their hands and cleanse.

At the shrine, one will find stalls selling votive tablets, individualized prayer plaques, for a few hundred Yen. I did not buy one because it does not resonate with me personally; I am not a Shinto practicer. One can also buy poetry here by the late emperor and empress themselves in the traditional 31 syllable form. We did purchase one scroll.

The Meiji Shrine is beautiful, but one off putting spectacle I kept seeing was tourists taking pictures of children without the permission of the parents (at least that I know of). During my visit, there were many families in kimonos and formal attire, which was frankly, adorable. However, it was concerning when strangers started to crouch down and snap shots of families together and especially their little ones like they were the professional photographers who were already taking pictures for the people. This is why I am conflicted about posting the photo above, but ultimately chose to post it because it does not explicitly feature children and was a public procession.

My father made the argument if he were to have put me in a hanbok (a traditional Korean outfit) when I was little and we were at a temple, he would not have minded people taking pictures of me in the setting as this documentation should be expected in this condition. Nevertheless, as a blogger who likes to think that he is professional in most aspects, I do not condone intentionally taking portraits of people for publication without their consent. If someone wanders into the frame, so be it, but I extend the former rule especially toward children and do not believe anyone should explicitly photograph a child without a parent’s consent.

When you leave, remember to bow out too.

What I feature here is still a fraction of what the Meiji Shrine has to offer (this goes for the Imperial Palace as well). Be it the rain or sections currently under maintenance, I was not able to see what all these sites had to offer. You’ll just have to fill in the blanks for me. I’d love to hear all your experiences here in this vibrant city too!

Next to the Meiji complex, the neighborhood of Harajuku awaits anyone who wants to contrast their shrine experience with some Japanese street fashion and sub-culture. Known for its delectable crepes, boutique shops, and youthful atmosphere, Harajuku is a hub of developing trends, lifestyles, and anime for metro-Tokyo located conveniently off the Chiyoda (green) line. It is hip, jam packed, a little weird at times, and just a fun time.

Takeshita street is a pedestrian highway full of shops and stores with cute knick knacks and goods and cuisine to sample. This area also seems to be more international to me. It seemed many more of the shopkeepers and promoters were not ethnic Japanese compared to those in the other parts of Tokyo we have visited, which was a first to see in a relatively homogenous country with stringent immigration policies …

It was an exciting and lovely end to a day of fulfilment, featuring most of what I wanted to see in Tokyo in less than 24 hours. Using the metro system, it was not even a rush. There was no urgency to the day, and we seemed to just wander into the right places including a Japanese style Korean BBQ restaurant! Rain or shine, we here at Expat-terns would declare today a success.

Tonight, we are most likely headed to a ramen house! However tomorrow, we are headed to Hakone to try to get a glimpse of Mt. Fuji! Hakone itself is a small municipality and will be a nice excursion from the capital. Unfortunately, we may not be able to ride a Yakatabune (river boat), but my spirits are not easily getting down (even though it seems my grandfather’s sweater shirt may be forever gone … Sorry, that was a tangent). Stay tuned for Day 3: Mt. Fuji awaits!

2 thoughts on “Strolling Through Shibuya: Iconic Scenes in Tokyo”