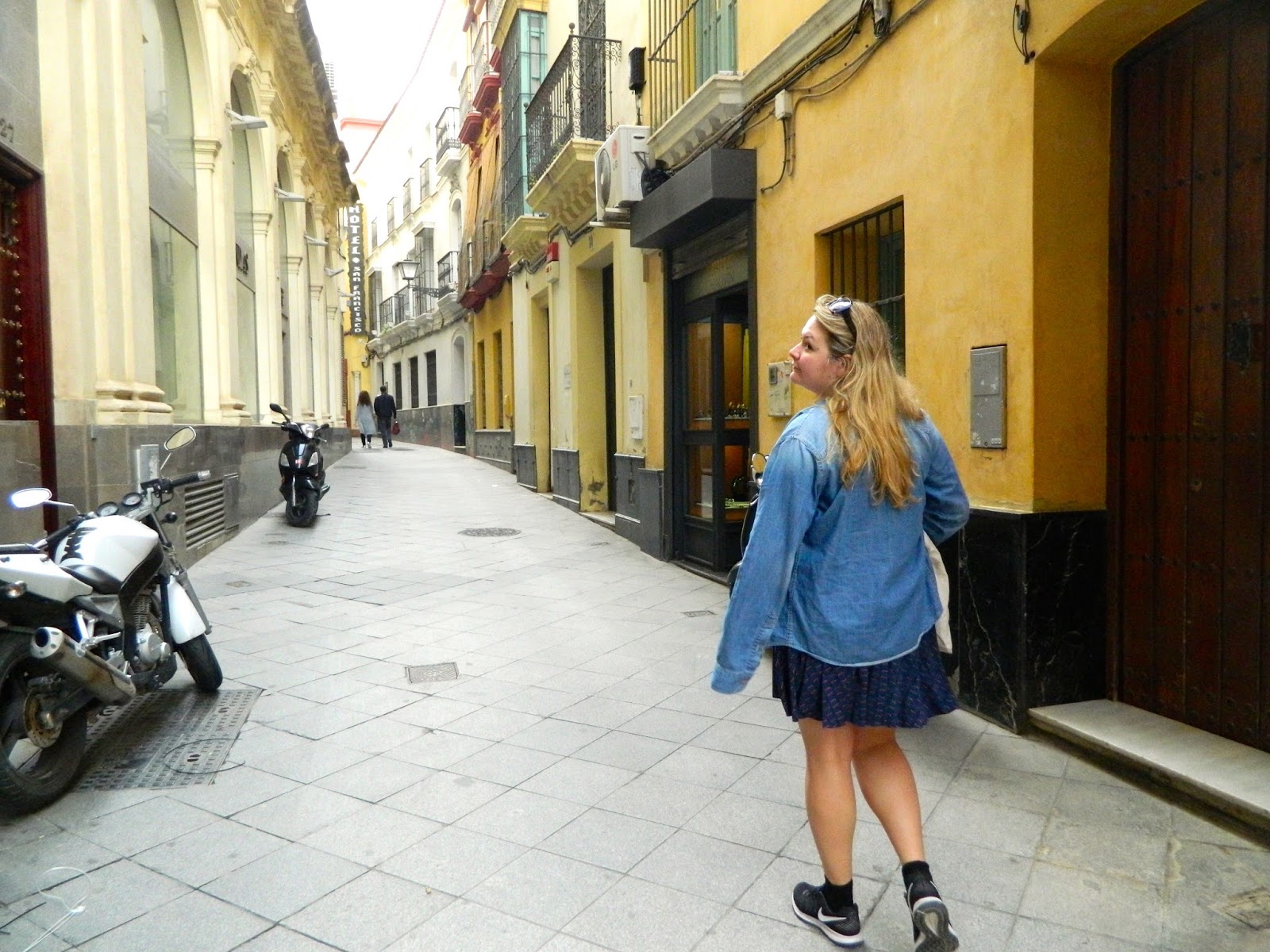 Picking up from where we left off …

After some much deserved beach time, Nina and I left the lovely, but lonesome Lagos to head to Sevilla, Spain. We were a little worried because there was no indication if/ when our bus would actually come other than knowing the time the bus would theoretically leave. However seeing that Lagos only has one bus stop, we hunkered down and anxiously waited for our chariot to arrive. And, we were successful.

The trip from Lagos to Sevilla is only four and a half hours with infrequent stops (at least during the slow season) through the Portuguese countryside and a bit of Spain’s as well. It was a scenic trip and quite relaxing until … the Leicester people arrived.

Once in Faro (the de facto capital of the Algarve), our bus was boarded by a herd of Englishmen (and some women) from Leicester (pronounced leh-stah) who were also heading to Sevilla for a soccer game, featuring their home team and Sevilla FC.

The remaining two hours of my life after their injection into the bus still haunt me. Imagine a loud, sexist, drunken cloud of men just descending into every corner and crevice of an enclosed space in which there is no escape. They drank, constantly hit on Nina, never stopped talking/ attempting or more honestly making fun of the Spanish language, sitting on my belongings, and littering in the bus and even on the side of the road during a brief pit stop. These were grown-ass men with their adult aged and young children as witnesses to their sloppy, vocal asshole behaviour. Needless to say, I was extremely happy their team lost against Sevilla the following night.

One Welsh guy from the group apologized to us for the behaviour of his comrades, telling us, “not all English are like this.” Of course, he then proceeded to do nothing to stop his friends from being pricks. So, thank you random Welsh guy, that made me feel warm and fuzzy while one of your friends described ‘a man’s space’ as ‘anything in his reach’ …

After a gruelling remainder of a bus ride, we hopped off finally in Sevilla and booked our asses as far away as possible from the Asses that were on the bus.

We preemptively researched some hostels and decided on Oasis, which turned out to be a bit of a buzzkill. The location closer to the center that we originally were looking at was out of commission for renovations at the time, so we had to backtrack and lodge in the other branch farther from the center.

Honestly, Oasis is an obvious corporate hostel to say the least and gave us weird vibes. The range of ages of occupants was seemingly 18 – 55. We were surrounded by European high schoolers on their senior trips and also single middle aged men just roaming around Europe for a wee bit. After a few drinks on a chill night out at la Alameda (a central promenade of sorts with many bars), we decided to find a different hostel for the next night.

Right by the Alameda, there is a reasonably priced downplayed hostel called Hostel One, which suited our needs perfectly. With a free dinner and free night tour (which Oasis wanted serious Euro for …), we enjoyed our remaining time here and were able actually to socialize with people closer to our age.

From here, we explored the various sites of Sevilla.

Our first stop was la Catedral de Santa María de la Sede – one of the biggest draws for tourists as one will find out if he or she visits. Located close to the equally stunning Alcázar, this Gothic structure is one of the largest churches in the world and contains an iconic bell tower that one can ascend for panoramic areal/ virtually arial views. These vantages are also quite helpful for those who need to survey the city for their next destination …

The cathedral also holds a pseudo-orchard of orange trees. Oranges are big here in the south of Spain. Don’t believe me? Try some salad; they may show up in it! From sweet to sour, the building is also the final resting place of Christopher Columbus … as a student of FNEL (First Nations and Endangered Languages), I had to stop myself from doing something that would not have been deemed appropriate for a church/ get me kicked out. I could think of some friends who may have had some more radical intentions. I endorse nothing; your actions are your own; go see it; what you choose to say or do to this genocidal asshole’s tomb is none of my business …

After a self guided tour, we went to the adjacent Alcázar Palace, which features in contrast detailed Moorish architecture. Geometric shapes and rich blues will put you at peace as you traverse this palace built for the Muslim kings who resided here during Moorish rule of the peninsula. Later on, Catholic influences and portions were built into the structure, adding to the grand size of this expansive, urban estate.

Of course, the gardens are its most attractive spectacle. Just don’t get lost in the maze! And, enjoy an orange if you desire; there are even more trees inside!

As for personal budgeting, both these attractions are relatively cheap (especially with student ID), but arrive early. Lines are long, and the south of Spain can get hot!

After some cheap salmogrejo and pizza for a little lunch, Nina and I headed to the Plaza España, probably the most grand of the city’s public spaces, located north of both the cathedral and palace. The plaza has its own mixture of regional architecture including the Neo-Moorish and Renaissance. Aside from marvelling at the intricate tile work, residents and travellers alike also enjoy the conjoining Parque de María Luisa and sometimes take a boat out in the plaza’s ‘lazy river’. Carriage rides are also available.

After wandering through the Jewish quarter and running into more Leicester people (agh), we arrived at a delicious tapas location back closer to the hostel: Taberna Las Coloniales San Pedro. Quail egg and chorizo, goat cheese and honey, fried eggplant, octopus, sangria … life is good at this place. Relatively cheap, we returned the next day with our new impeccably British-accented Japanese friend from the hostel. On this occasion, we ate so much the waiter was concerned. The dessert platter was the final straw that made him question if we were alright. However, he did offer us a free shot to settle our stomaches, so, now you know, eat like a pig … receive free alcohol. Goals!

After a deserved siesta and free dinner at the hostel (chicken curry), we ventured out to a free flamenco show with our hostel mates. It was interesting as someone who has studied bellydance to watch flamenco as they share similarities. Fun fact: the more east you go, the more likely dancers will rotate their hands and wrists out compared to into the body. The movements and music were soulful and, someone described the artistry as ‘painful’ even. The remark that Iberians carry a lot of pain, either saudade and Fado or in the timbre of a flamenco singer’s voice, I can definitely understand. However a part of me thinks of the pain both kingdoms created in the Americas not so long ago as well. It is all relative I guess …

After the show, we went to some quaint bars and found out that Leicester had lost the match. Speaking with some drunk Englishmen, I learned that they were still in the running for some competitions because they did score at least one goal. Nevertheless, judging by the sad expressions and the large amount of red eyed men in blue and white jerseys sitting on the curbs, it was still a rough night and probably a rough morning after.

Overall, Sevilla was Nina’s and my favorite city that we visited on this trip. It was cosmopolitan, but still historical and still youthful in its energy. The way the sunlight hits the walls and towers of this city gives the city a subtle saturated hue. To see the best views of this bustling southern city, go no further than las Setas (de Encarnación) or ‘(Incarnation’s) Mushrooms). Officially the Metropol Parasol,  this massive sculpture was completed in 2011 and consists of parasols forming ‘a mushroom’, which I can still only partially envision. Underneath las Setas rests an archeological site (Antiquarium) that is also open to the public during specific hours for a small fee (2 euros). One of the best deals of the city, the ascension of the complex is a total of 3 euros that includes a free drink and postcard. Go at sunset and take in all of Sevilla.

Next, we headed off to Córdoba, slightly north of Sevilla. We decided that we were not going to Morocco as a result of time and money restraints. Nevertheless, it was a new city and new sights; we couldn’t complain. Saying goodbye to new friends and the first Spanish city on our Iberian excursion, we left midday by bus.

As you can see, I am back at it! I am still in need of some major R&R, but these articles need to keep coming somehow! Next up, we have two more recaps from Spain and expect a lot of summer fun in Vancouver! Travel safe and often!