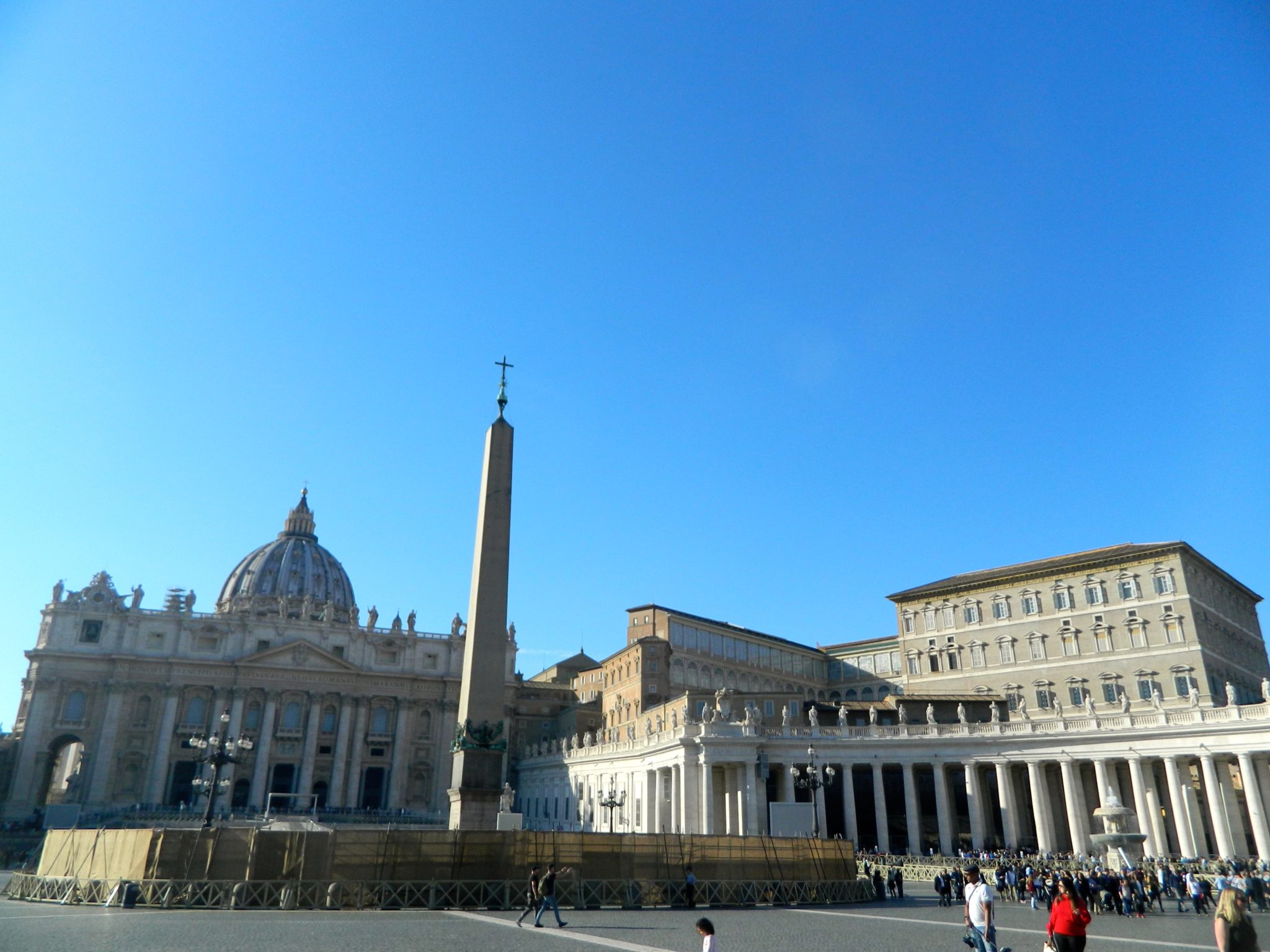 My last day in Rome I wandered my way to the Vatican, the centre of power of Catholicism. Formally established in 1929 after becoming independent from Italy, which encloses it at all sides, this special city state is the modern home of the Pope (its head of state) and of special international jurisdiction as part of the Holy See.

It should be said that there were at some points in history, in fact, multiple, simultaneous Popes as a result of religious splintering and schisms. However, today, the one who resides here is the unarguable sole Pope of 2018 (for now). You never know …

To get to the Vatican, the metro is one’s best bet for a quick and painless arrival. As one draws closer and closer, the sound of tourists from all over the world will begin to symphony together. The best stop to get off at is Ottaviano-San Pietro (despite the makeshift signs that might say Lepanto) on the red line. Ottaviano-San Pietro is slightly closer to the site!

The Vatican is small, very small. City states usually are, but the Vatican is extremely mini compared to other well-known municipalities of the same type like Singapore or Monaco that at least have skyscrapers or gambling, respectively, to distract from their little physical area. The Vatican I suppose has faith on its side.

To plan, a visit is worth a morning (not the afternoon). It fills up quickly with tourists as well as vendors looking to make a quick euro. Be up bright and early and get ready for crowds galore. However, during the evening, the masses do dwindle a bit, so a sunset painted romp is also an option if one is delayed. However, midday is packed!

The main draw to the Vatican is St. Peter’s Square and the basilica of the same name that supposedly has St. Peter himself under it. It is well known for its papal seat of authority, Michelangelo’s influences and work on its structure and interior, and also as a site of many pilgrimages for Christians. Riveting.

To enter, it is free. However, line times vary depending on season, so expect to wait at least 45 minutes if not more. Also, as it is a holy site for some, be sure to wear the correct attire. Most men cannot wear hats indoors, and the greatest enemies of any authoritative Catholic, the shoulders and knees, should be covered, of course. Also, “the mortal sin of photography” is not permitted within either.

As a non-Catholic, the Vatican really holds no great significance to me whatsoever. Actually, being Jewish, it really means nothing.

And, to be honest, I did not consider this place holy. Despite the visible opulence that the Vatican physically possesses, it is hard to not think about the recent and historic pedophilia and sexual abuse that the church has been aware of for some time and has actively tried to cover up, homophobia, transphobia, ingrained misogyny, and complacency and active participation in genocide.

For some, it must be the closest thing to holy that an earthly being can come by, while for many others who have not conformed, it houses not angels and saints, but nightmares and histories that some would prefer to forget, but cannot.

A quote from Taika Waititi’s Marvel masterpiece ‘Thor: Ragnarok’ came to mind when I was strolling through the promenade and square. Cate Blanchett, as Hela, remarks to Thor, her brother, “Odin and I drowned entire civilizations in blood and tears. Where do you think all this gold came from?” Something to think about if you visit … Something to think about throughout a lot of Europe actually.

After I had spent enough time avoiding eye contact with people trying to sell me rosaries, battery packs (which I actually could have used later in the day), and selfie sticks and, of course, marvelling at the design and grandeur of the destination, I left the Vatican in search of nourishment. As one might expect, the Vatican being a concentrated epicentre of tourism equates to high prices for food, so it is best to avoid consumption there.

The Vatican boasts also an array of groomed gardens, which gives the area a very Bahá’í feel if I do say so myself. I had looked forward to strolling through them, but I was getting hungry, really hungry. It was time to go.

I was headed back to Trastevere (20 minutes south of the Vatican on foot) for something to eat.

For my celebratory final formal meal in Rome, I settled for an osteria called GINO 51, which provided both delicious plates and wifi! Many locations fill up or require a reservation on Sundays, so be prepared to wait, call ahead, or be open to what is open to you!

GINO 51 had tables open and looked tastefully crowded. What the hell — why not?

Cacio e pepe is one Roman dish that is acclaimed for good reason. Literally ‘cheese and pepper’, it is the epitome of ‘keep it simple, stupid’. Creamy and savoury, it is a perfect pick-me-up for anyone who has low blood sugar.

Another few delicacies I was able to sample were supplì and fiore di zucca (see above). Upon my return, I mentioned I got to eat these treats to an Italian friend in a course here at Lund, and she lit up. They are comfort food for the soul! What isn’t delicious fried and filled with cheese?

Fortunately, I was able to eat more supplì later in the evening. My hosts ordered pizzas and invited friends over, so I got to socialise with some locals too while stuffing my face. All were very charming and funny. It was a mix of English, Spanish, and Italian to communicate, but everything went well and smoothly (despite two friends’ car not starting initially), and classic-style Napoli pizza was a perfect way to wind down and nourish me for the trip back to Scandinavia the next day.

I am excited to head back to Italy in December to say the least. The portion sizes and hospitality are legendary for foreigners, which I have missed after living in the more reclusive Sweden. No wonder Italy is so popular. A presto, mi amico!

We have been back in Lund, Sweden for a bit now and are gearing up for our next adventure in [drum roll please] … Brussels, Belgium. Ohlàlà. Get excited for waffles, beer, and mussels in the HQ of the EU! Stay tuned and travel often.

78. When traveling, it’s always interesting to learn the rivalries and grudges that some nations still have for each other even if it’s a little passé nowadays to have or acknowledge them.