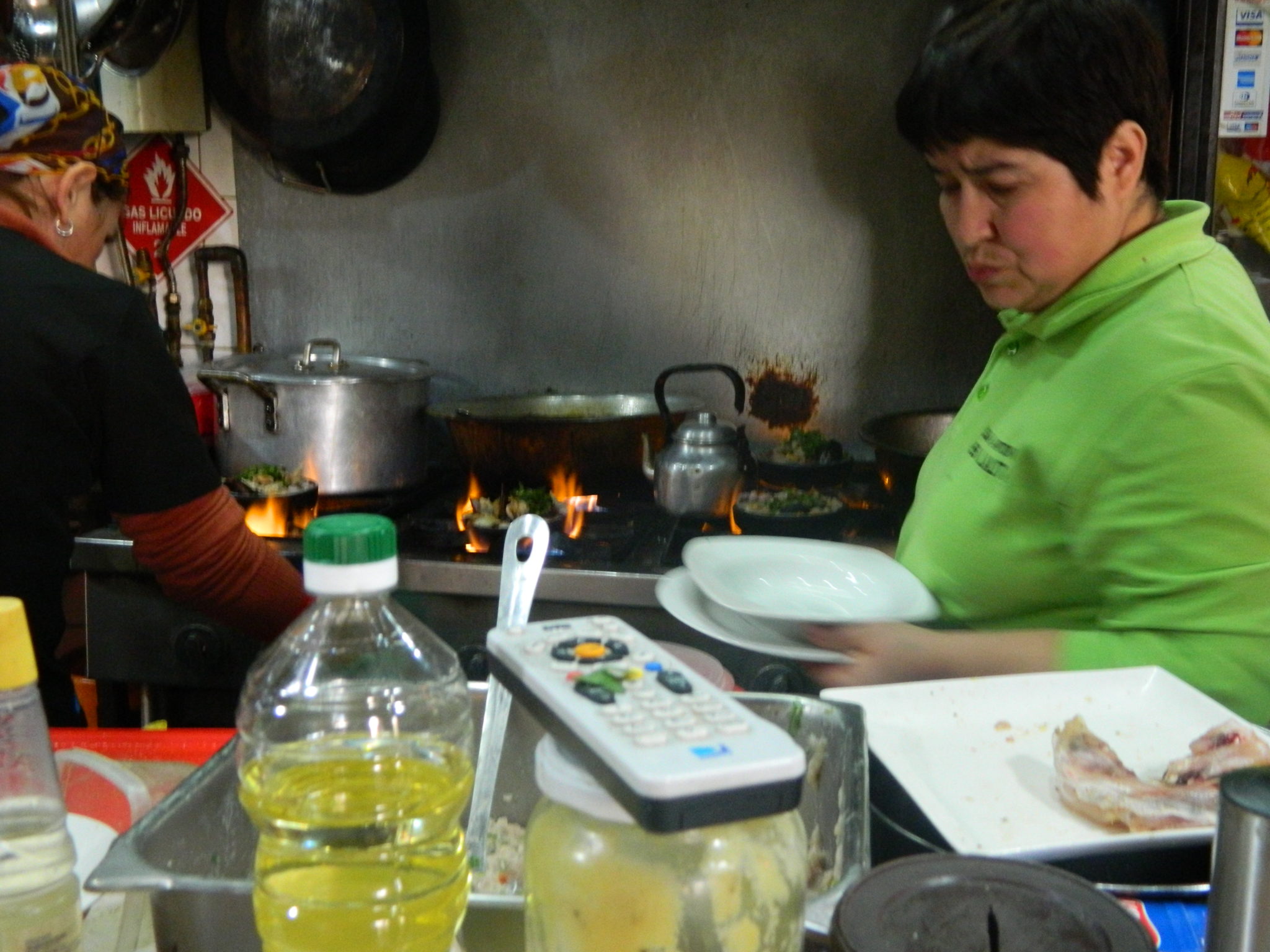 I have been saying for days that I’d show you all the action and interior of Santiago, Chile, well … here we go! Today, I took el metro (subway) in order to go to some of Santiago’s most iconic locations: Mercado Central and the Bellas Artes neighborhood.

Mercado Central is one of the world’s foremost marketplaces. Specializing in seafood, it is filled with restaurants and stands all claiming to have the freshest catches. I was overwhelmed, and being Asian, I got a lot of attention from the vendors and greeters who would ask me to eat their seafood, referring to their catches in Japanese.

I was asked multiple times if I wanted to try their sushi/sashimi. Eventually around lunchtime, I gave in, and when a man offered Uni (sea urchin in Japanese) to me, I couldn’t resist. Though they didn’t actually have sea urchin (or oysters, I checked), the bar where I had my lunch was fantastic.

I forget the restaurant’s full name, but it started with San Antonio. The women who cooked the food were right across the bar and busy as ever – battering and frying fish, chopping cilantro, and adding mussels and shrimp to piping hot broths.

They first served me a delicious ceviche. I like to think of ceviche as South American sushi. It’s raw seafood that is slightly cooked in citric acid (usually lime juice). With a little hot sauce on the side, the ceviche was phenomenal, tart and spicy, just like I like it.

Later, they served me a delicious seafood soup in a hot, stone bowl, which reminded me of a dolsot (a common Korean, stone bowl used to serve/cook food at your table). It was a light broth with a lot of cilantro and was filled with fish, mollusks, and crustaceans of all kinds.

It was the perfect, Chilean lunch. I have been eating very hardy pastas and meaty stews for the last few days, so this light, delicious, and different meal was so refreshing. For a mere, 3,750 pesos (which included a drink), I left content and so did the restauranteurs. I gave a nice tip, and meeting a foreigner really seemed to brighten their day. After once or twice more around the market, I left for the subway to go into a new section of Santiago.

If you go to Mercado Central when you’re in Chile be sure to keep an eye on your things (it’s crowded especially at lunch), avoid the center area’s restaurants and shops (they’re more expensive), and sample as much seafood as you possibly can!

Bellas Artes is a hipster’s heaven. It’s a section of Santiago filled with colorful murals, unique clothing shops, and coffee houses. A bohemian would have a heart attack of joy and would recover by simply going to one of the new age, medicine shops scattered throughout the neighborhood. Besides youths (ugh), it is famous for being home to one of Santiago’s most fantastic art museums – Museo Nacional de Bellas Artes.

However, it is not open of Mondays, so I was unable to enter. The museum’s exterior is sadly littered with, well, litter and offensive graffiti – it is a real shame. I am probably going to visit it again tomorrow, but this time wearing better clothes. I got some very rude looks from the posh, “cultured” people around the barrio (neighborhood).

I must admit today, I was a major tourist, but not rude or emboldened. I was camera-ed and Asian – nothing more touristy than that. Much more to come about Santiago, and its beautiful, amazing neighborhoods! I am planning to go to some more markets and museums soon! ¡Ciao!