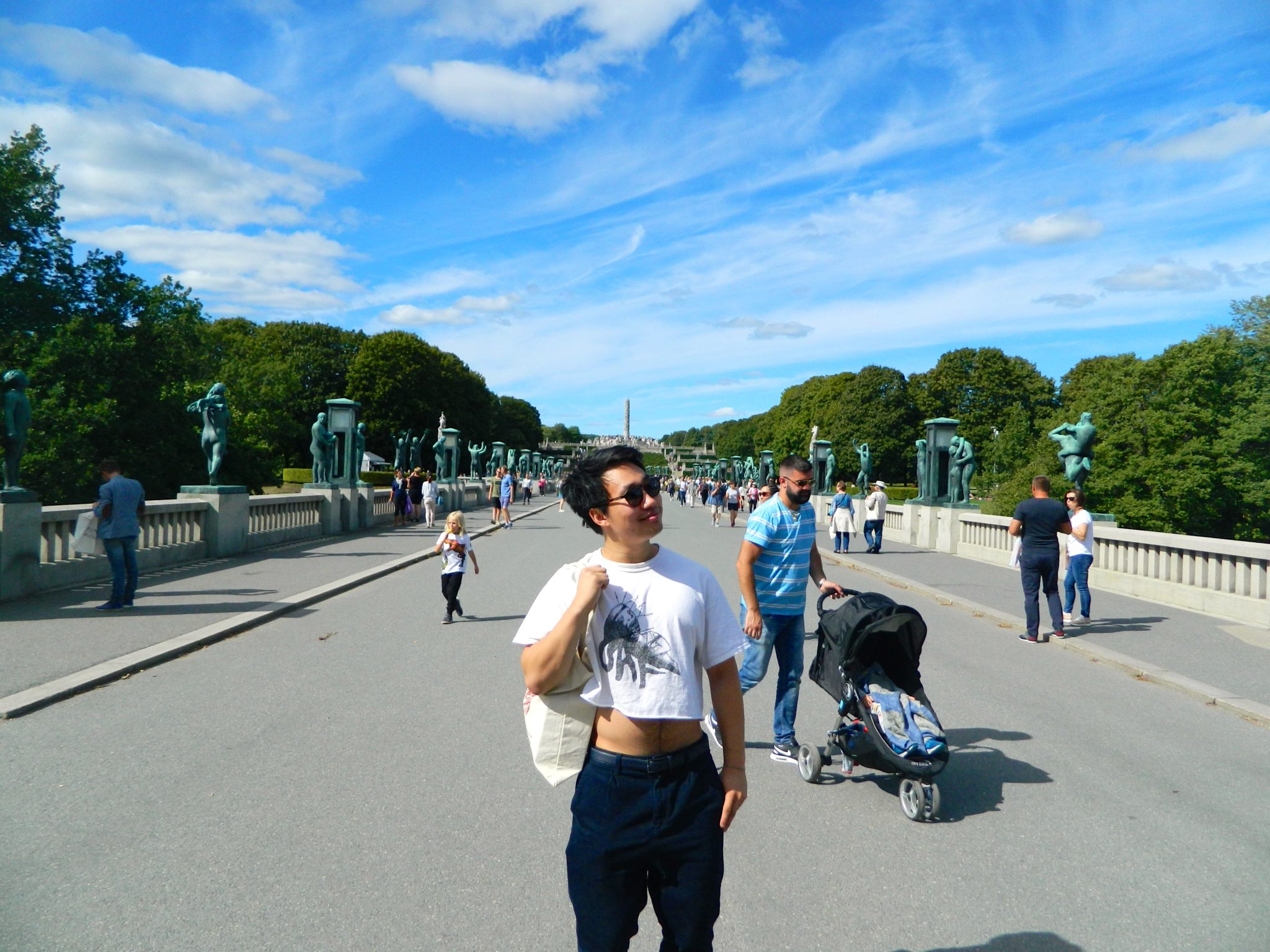 No trip to Oslo for the first time would be complete without visiting a few classic and noteworthy sites. Oslo’s historic art environment as well as deep held Scandinavian heritage lend tourists a stunning array of northern European delights/ attractions to sample.

An extremely walkable city as well as compact, touring is relatively simple. Hop On, Hop Off buses are available, but as usual, I recommend doing it yourself.

Nevertheless, I did have the advantage of having a car at my disposal, so travel was extremely easy in my case. Not every person is as lucky, but as mentioned in my last post, the public transport here will do just fine.

Anyhoo, check out these accessible and some (off the beaten track) locations to visit during the day and night …

Of course, the Viking Museum (Vikingskipshuset) is a must see and unsurprisingly, one of the most popular indoor places (perhaps besides the Nobel Peace Centre) for tourists to visit.

Located on the peninsula called Bygdøy, an affluent area, this museum houses a collection of Viking artifacts including the remains of three burial ships that have been largely reconstructed. It is a part of the University of Olso via the designation of Museum of Cultural Heritage. Oow. She’s a traditional queen.

With a rather open design to display the ships, the museum itself from an amateur museology viewpoint is not exactly optimal. Low-lighting, likely to help maintain the antiquities, makes it difficult to see or photograph the displays. The floor plan, although walkable, does not necessarily guide visitors in any specific direction. Personally, I think this setup fares better in larger museums, not one with essentially 4 main halls that are all connected.

One of the most interesting exhibitions (excluding the ships themselves) is a projected walkthrough of the life of the Vikings, our favourite notorious Norse pirates. Displaying their trade routes, which reached into Asia minor I might add, to their resting places in burial mounds, the A/V work is exquisite and captivating to complement the rest of the museum.

The “movie” is in the right hall with the most destitute ship that could not be reconstructed from its remains. It runs approximately every fifteen minutes.

Prices vary depending on demographic, but with valid ID, students get a discount (total: NOK 80; kids under 18 get in for free)!

To get to the museum and most of the locations on this list, take the 30 bus from Aker Brygge for a short 20 minute ride to the peninsula. One can also reach the location by ferry, but it takes a bit longer and get ready to walk way more too. It also departs from Aker Brygge if one wishes to try it.

The next location, which is a bit off the beaten track, might not come to mind for most. However, for me, it definitely was an interest as well as my friend/ local, a history buff.

I present Olso’s Centre for the Studies of the Holocaust and Religious Minorities (Holocaustsenteret (HL-senteret)).

Located at a tip of the peninsula, the museum was actually Vidkun Quisling’s residence at one point, the infamous Norwegian Nazi conspirator/ ally.

Now, it houses a permanent collection and timeline of the events of the Holocaust from a Norwegian vantage as well as rotating exhibits. It serves as a larger setting for research into the Holocaust and other forms of prejudice relating to religious denominations.

Juxtaposed in a residential area, it is not what one might expect for a Holocaust centre. Design-wise, I favoured this setup to the Viking museum. Perhaps the nature of the material lends itself to easier interpretation. Following the timeline of the Holocaust and WWII, the museum winds through all floors of the massive estate, featuring A/V displays.

Unfortunately, there is not much English, which is telling to whom this centre is aimed. But, the welcome desk does supply visitors with a multi-lingual interface (tablet) to aid in interpretation. That being said, not all the information is presented.

As far as Holocaust museums go, I actually thought this one was quite well managed and informative. It was self-critical of Norway’s involvement while speaking to the resistance that the Nazis faced through occupation, but did not veer from the anti-semitism that Norway did have prior and after the war.

One aspect I enjoyed from the displays was the use of light. Unlike the Viking museum, the centre was well lit, but one of the final sections features the names of the Norwegian Jews who were murdered in a white, well-lit room to commemorate them. It was interesting to see familiar names as always, but also the Norwegian variations of Jewish names. Intermarriage seemed to be more common than other places in Europe, which lended itself to a different history during the Holocaust as well.

Overall, I highly recommend visiting the centre if one is already seeing the Viking museum. It is informative, and as I realized, this history is unavoidable in Europe if one wants a full, real experience of what makes a city, country, and larger region the way they are now. Tourists can choose to avoid these topics and viewpoints, but those who would stray actively away from them likely (I think) also stray from engaging in larger discussions of their histories at home as well. Perhaps …

Aside from research, the centre welcomes around 10,000 school children a year, which is great to know. The museum was relatively empty while we were there, but did start picking up traffic-wise when we left. Ticket prices for students are NOK 50 if you choose to go!

A more cheery attraction … the Kongsgård is a farmstead that houses livestock and ponies and although technically the Norwegian king’s property, is open to the public. My friend rode here as a girl and worked here into her adulthood (yes, she is a horse girl – no judgement), so she was happy to take me.

It is a charming local for sure, perfect for a stroll and to view the animals in a mini-countryside next to Oslo. It is at the entrance of the peninsula, so be ready to make an abrupt left from the roundabout!

It is an easy location to bike to as well (in case you are not driving). Just maybe don’t expect to ride the animals, but for a little break from the hustle and bustle, this is the place to do it.

Definitely one of Oslo’s most famous outdoor tourist sites, the Vigeland Park is a massive park featuring the famous sculptures of Gustav Vigeland.

Emphasizing the human body, kinetics, and anatomy, the park is busy on a Sunday especially, with both tourists and local alike taking in the art (and sunshine permitting).

The park itself concentrates the sculptures and statues in one main row that expands to the entrance, but the rest of the area includes a de facto dog park and other sitting areas perfect for sunbathing or a picnic.

The pieces are sometimes brash, other times sanguine. The most famous piece is likely this fat, angry baby in the centre of the bridge. People rub its hand (or penis) for good luck. You can find it by the crowd, surrounding it.

It is definitely worth a peak, but be aware of the massive amounts of tour groups. Getting that perfect shot might be harder than expected.

From Aker Brygge, the 12 tram will get you there in no time! And, it is free, of course.

So, you’ve seen all you can in the day – what is next?

As a connoisseur of the gay club, I am a fan of Elsker. Either meaning ‘to love’ in Norwegian or also ‘lover’ I believe, it is a multi-tiered gay bar with patio. One of the two most famous gay hangouts, the other being London (a bar), Elsker has something for everyone.

The first floor is more pop/good time-y (think ABBA) music while the middle floor is techno. The highest floor (after a shit ton of steps) features gogo boys and more electronic.

Payment for the club was NOK 100 (which can be paid by card) while drinks are expensive af since it is Norway … get your ciders in beforehand people!

Clubs close around 3:30 AM (like in Vancouver), but they only get started around 12-1 AM. Overall, we had a great time and met a lot of other tourists there on vacation. It is a well known venue!

However on the street walking back to the b&b, one of our friends was getting stalked by a creepy man whom I confronted. He asked me if I speak Spanish and then proceeded to call me ‘maricón’ (fag), which was not wise for him.

Boy, was he surprised. And, boy, did I get him to back the fuck up.

Even after the homophobic incident, I actually felt a little empowered. I told myself I would not take shit in Europe and voilà, no shit taken. I wrote earlier about my concerns on travel as gay, Jewish, Asian … etc. … And, I think I am living by my mantra of fearlessness thus far. Let’s hope I don’t have to do it too much.

Hopefully, no one slurs you while visiting!

This list will make at least 24 hours in Norway’s capital planned and pleasurable. It sure was for me at least. Oslo is a beautiful city, but not one of the major tourist destinations in Europe. Although, I think it should be. As a result of price, geography, and climate, it does not attract the same tourists as let’s say … Prague or Barcelona, but if someone wants a somewhat refined and relaxing excursion, this city should definitely be on one’s radar.

So, I am off to Lund, Sweden via Copenhagen, Denmark. Funny how I will be technically in all the other Scandinavian countries before my actual destination. Whatever. Get ready for more posts about lovely Lund and settling in. I seriously hope I can open a bank account … Stay tuned!