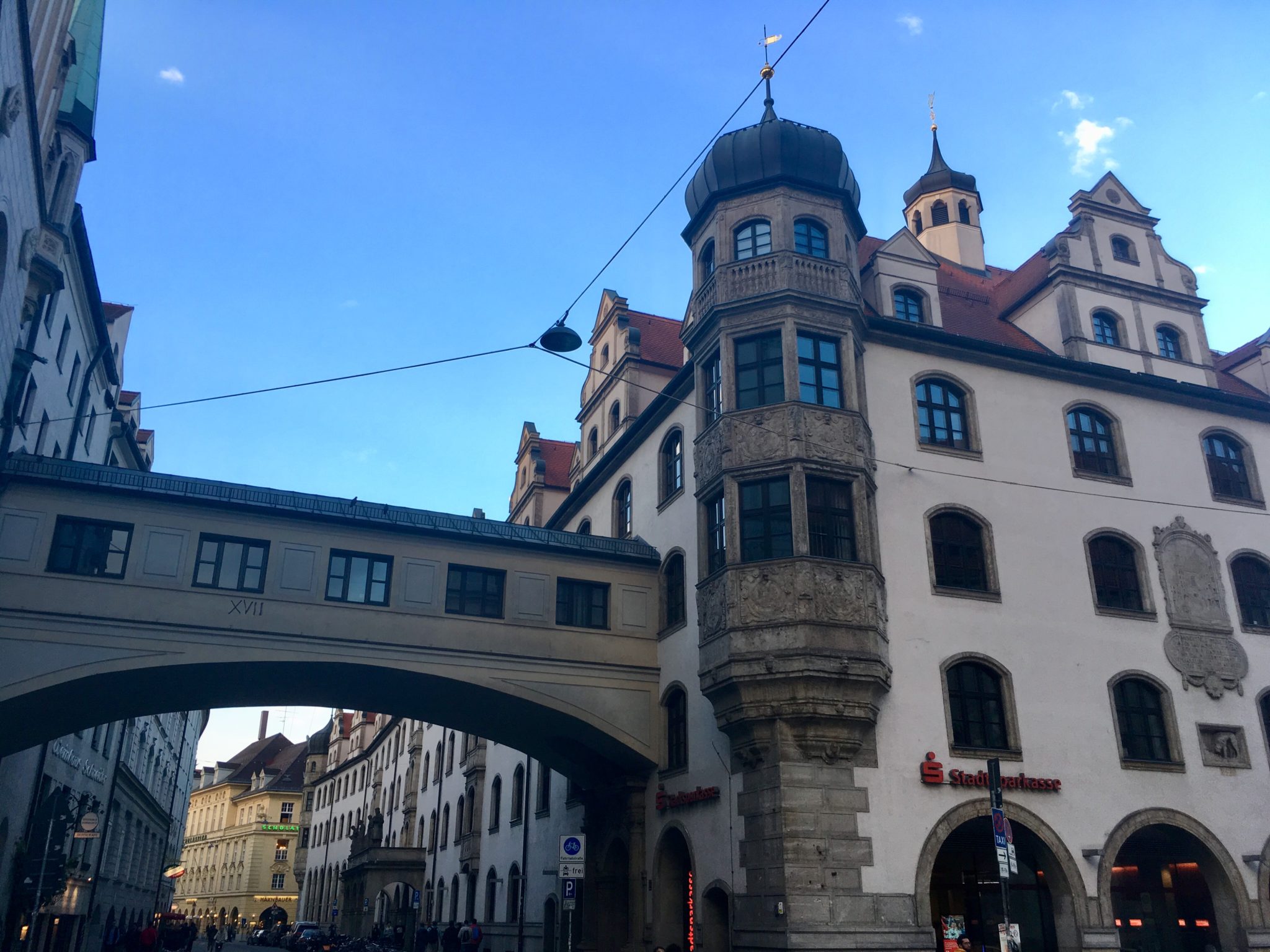 Bavaria or Bayern in German brings to mind so many images of Germany, particularly for North Americans. However, in reality, Bavarian culture is remarkably specific to its own state. This connection to Altbayern (High Bavarian culture) is a thing of pride for people of the region, as at one point, Bavaria itself was an independent Germanic kingdom.

This sense still lingers even among the youth. Meeting some young Germans or shall I say, young Germans and two Bavarians, in a bar – they were vocal about their regional identity before their national one.

The centre of Bavarian culture is unsurprisingly its largest city: Munich or München in the proper German. (Be sure to pronounce the ü with rounded lips.) The third largest city in Germany, München is a popular destination for visitors and boasts an international food, art, and sport scene with the world famous FC Bayern as its Fußball team.

One intangible aspect of Bavarian culture today is of course its distinct accent and dialect. Bavarian itself is technically its own language that belongs to the larger High German group. However, many German speakers have significant issues sometimes understanding Bavarian and even Bavarianised German itself.

It has commonalities with Austrian German as a result of the historical area of influence as well as shares some features and vocabulary with Germanised Yiddish variants. This closeness may have been a result of the Jewish influence in haute Austria culture before the Holocaust.

For visitors, it might sound very different than a university German professor’s speech. And, this sentiment is shared with native German speakers themselves. One time, someone told me I sounded Bavarian when I spoke. I did not know how to take that …

Interestingly, despite its cosmopolitan backdrop, Bayern is generally considered to be more conservative socially. In comparison to the supposed openness and loudness of Köln for example, Germans see a stark contrast between this regional culture and others. Historical religiosity might be a reason for this variance.

Bayern is still an accepting location and generally livable. Unfortunately, racism and nazism are on the rise in Germany (as well as other places), but not withstanding this trend, München is remarkably safe to inhabit.

Arriving in München, I got into its respective Hauptbahnhof – a massive complex by close to Marienplatz (a major tourist landmark). The Flix bus station I used to leave is located close by to the central station to the west, but not quite next to it. It is the ZOB or Zentraler Omnibus Bahnhof. With the bahnhof in the phrase, one can see that it is a central station of sorts.

The train station connects directly into the metro line, which is convenient for travellers. If one pays for the City Plus option with Deutsche Bahn, he or she can use the metro on the same ticket on the day of arrival. Personally, I would recommend this option to speedily get to one’s accommodation.

As I have stated before, Deutsche Bahn is not the best company (nowadays), so my day trip to Passau was heavily delayed as a result of not having a train to get there! Luckily, the Hauptbahnhof is not as extensive as the Hamburg one, but try to spend as little time as possible here.

Pickpocketing is a reality, and the building’s businesses close down fairly early for a city station. Toward 9PM in the evening, I was denied service from every food venue I went and approached.

For accommodation this time, I opted for Couchsurfing after finally finding a host. Picking me up from the metro stop, my new British-German artist lawyer friend took me to his lavish, two-story apartment (lawyer, mind you) for a well deserved snooze.

For those unfamiliar, Couchsurfing is a social network for travellers to host and be hosted by locals for no charge. However, since its inception in 2003, the culture has changed greatly. Today, as a result of over-saturation, hosts tend to be inundated with requests, and the predatory gender dynamics of the site still need attention.

For myself, I tend to look for LGBT+ hosts. Like with misterb&b (as one can read in an article I was interviewed for), self selecting housing makes me feel safer in general while travelling.

I do not know if someone is a homophobe. So, I rather not take that chance.

My host in München fit the bill and also is an accomplished amateur artist, which sounded interesting.

Jemanden kennenlernen – (compound verb.) trans. to get to known someone

Hosts and the hosted can either spend a lot of time with each other or very little. It all depends on the relationships made between those in the abode.

As my host was a lawyer, he was busy most of the day, which allowed me with a free conscious to take a day trip and explore the city through Couchsurfing Group Hangouts (another function of the site).

That said, we spent a good amount of time together and shared what we could. Coincidentally, there was a Korean restaurant right by his block, so we went there and I helped him order other things than his go-to tofu dishes …

Back at the house, we agreed to do a sketching session. I modelled nude (nudity is quite German ain’t it?) for the first time, which was kind of fun. Of course, not every Couchsurfing duo ends up naked, but two adults can consent to whatever together, I suppose.

I would be lying to say we did not have some intimate moments together. However, they surfaced organically without any pretence or obligation on my part as someone staying at his place for free.

However, that is not to say that some hosts do get the wrong idea or have ill intentions.

One feature of Couchsurfing is the ability to make one’s travels public. The idea is that this option makes it easier for locals to know when one is coming (i.e. specified dates). I made my Hamburg and Köln stays public, but the only messages I received were from older, gay men whose pictures of past visitors were only other young Asian people.

It felt extremely creepy to have some people also be very pushy for me to stay with them. One even message me a parting nod that when I was in Hamburg, I should go to the sauna and find him there.

As a result of these experiences, many today who have used Couchsurfing in the past now steer clear away from it. The surfing culture has changed for the worst, many lament.

My general rules of thumb are always communication, safety, and getting the fuck out of there.

Bring up issues that arise or discomforts, always. I tend to do it in person as I can gauge reactions and responses. However, confrontation is not for everyone. For this reason, I also think it is best to always have a quick exit plan to assure one’s safety. Flight or fight — and we are not looking for a fight.

With finding an Couchsurfing host, if something seems off, say something or outright avoid. I have learned that when something usually feels wrong, it tends to be.

auf Wiedersehen – (expression [literal trans. until we see each other again] or Goodbye

Despite using Couchsurfing multiple times before for Hangouts, this time was my first to actually stay with someone. And, I really enjoyed it.

It was a new experience, one in which I could make a new friend along the way.

My host walked me to the bus station and even bought my dinner while we waited. Our hug goodbye was bittersweet, but I now have a friend I can stay with whenever I am in southern Germany.

If I am to be frank, Couchsurfing is not for everybody. There is an anxiety with it, an uncertainty, and those things are scary for travellers, especially solo travellers. I do not think at the start of my blog I would have been confident enough to try Couchsurfing alone. Dip your toes in with the Hangouts maybe and get a feel for the people, the internal culture of one-up-man storytelling, wanderlustful aspirations, and air of indulgence.

Hangouts are not the same as hosting, but it does provide a person of a glimpse into the Couchsurfing world and in extension, solo travel.

Onward we go! I am back in Vancouver (home sweet home) and also signed a lease, so I less stressed than I was beforehand. Get ready for one more Germany post about the wonders of Passau and its famous wiener dog museum! Then, it is off to Italy. I apologise for backlogging, but life happens, eh?