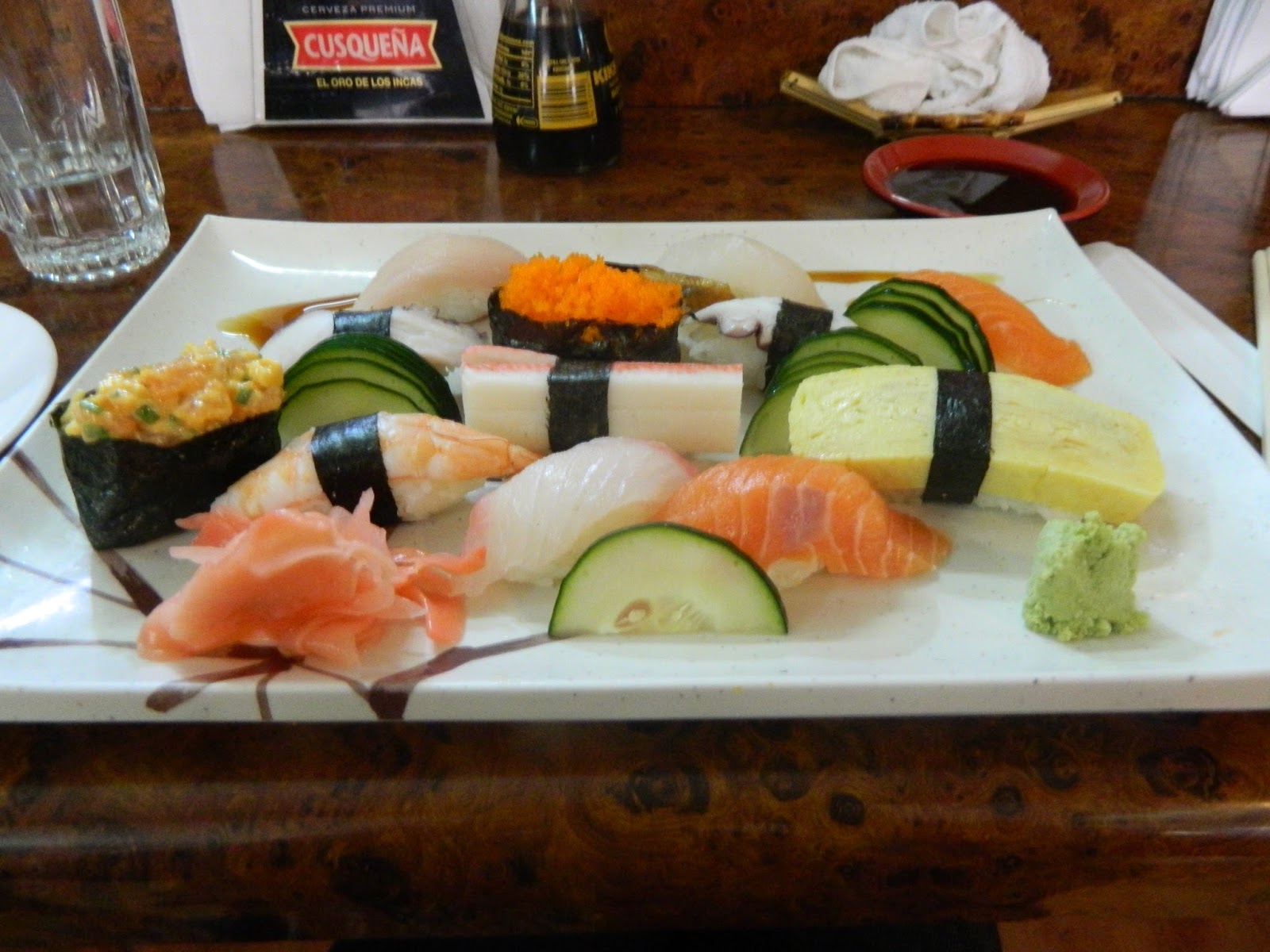 ¡Feliz Cumpleaños los Estados Unidos! To celebrate my country’s independence day, I treated myself to a good ol’ fashioned, Japanese sushi bar. I have heard that Chileans love sushi (my kind of people), but tend to add their own take on this Japanese classic. My host sister told me that here, they often add palta (avocado) to their raw fish (way more than Americans) as well as deep fry whole maki rolls.

For me, that’s a little odd, and since I wanted the least ‘odd’ sushi to celebrate my country’s secession from the UK, I went online to search for restaurantes (restaurants, duh). Sushi is not one of those things that you want to just stumble upon, especially in Sudamerica (South America) since its origin is well … oriental.

I found the least food poison-y sushi joint close to me (called Kintaro, in Bellas Artes) and headed to the subway.

I was so lucky; the restaurant was right next to the metro exit (in retrospect that could have been a bad thing). Anyway, I sat down at the crowded bar and ordered the Sushi Nori Especial. The place was packed and full of business people. I felt a little out of place, but when the food came – I was in my element.

It was nice to get back to the familiar for a little while. The sushi was fantastic, but there was definitely a distinction between this and sushi norteamericano (American Sushi).

After barely paying la cuenta (bill) as a result of my lack of pesos, I headed to the subway and an ATM to check out a marketplace in Santa Lucía. After getting off at the wrong spot, I wandered my way into the marketplace overwhelmed by the touristy souvenirs. I expected nothing less, but it was still a lot to take in.

The reason why the title says, “Chopping”, is because Chileans say the word shopping as chopping. It’s a hard “CH”, which I just love. It’s like living in a horror movie; people just go chopping now and again!   Back to the pressing matter, I went chopping. I entered stalls, said, “¡Hola!”, looked around, and repeated.

I eventually bought some gifts for my family after failing to bargain any of the prices down. It could have been a mixture of my own misunderstandings, the vendor’s stubbornness, or the fact that Chile is one of the few places in South America where bargaining isn’t common, but I ended up paying full price for everything. However, as the exchange rate for US Dollars to CLP (Chilean Pesos) is 1 USD:503 CLP – I think I did pretty well. Either way, I left content with my purchases and I could tell my bargaining had improved since Ecuador.

I am moving houses tomorrow night, again! I will be in an area called Huechuraba; I think. Only time will tell, but I am going to miss being this close to the center of the city. However, my new home is in a newer part of Santiago, so I may be seeing Santiago version 2.0.