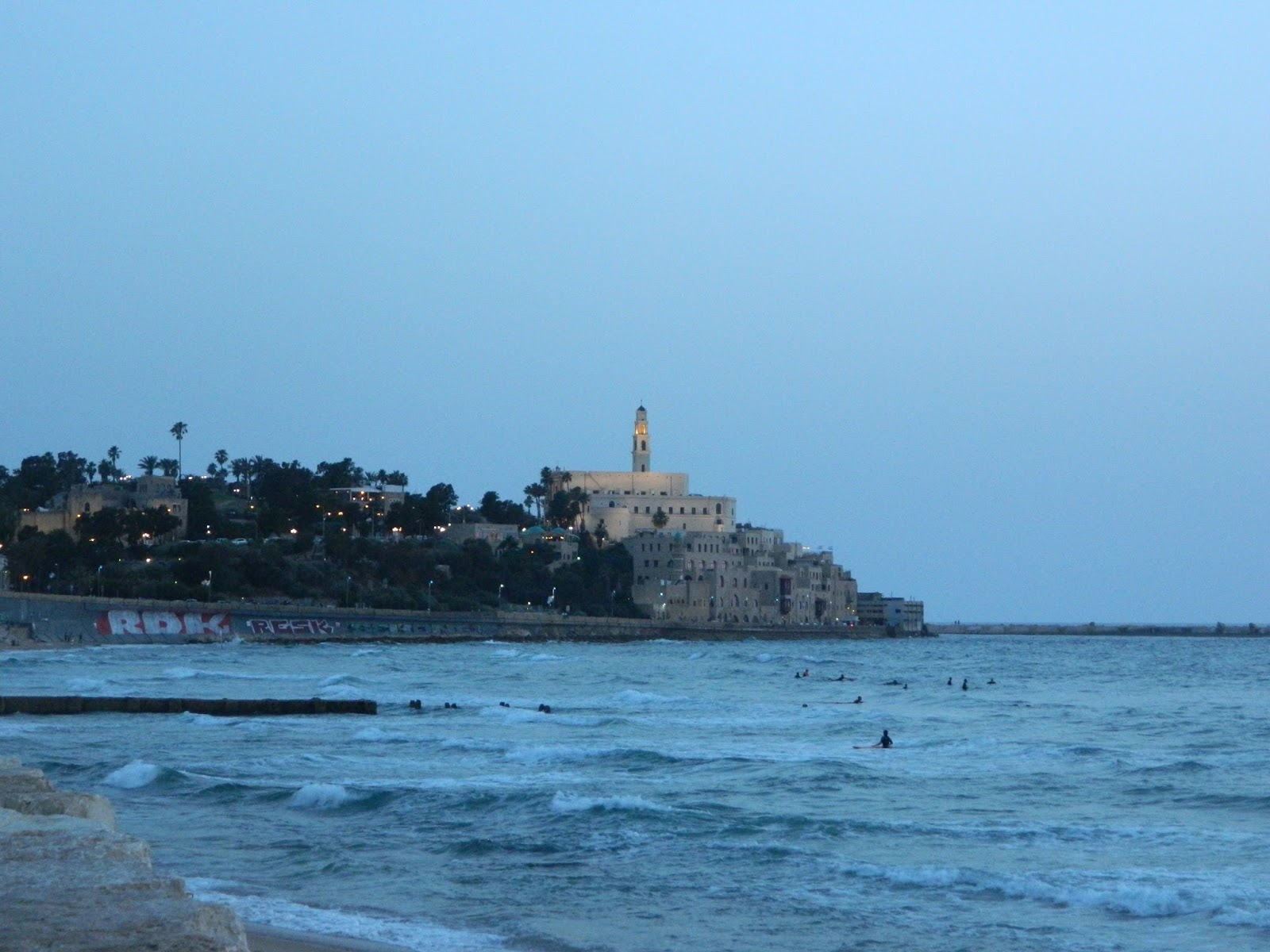 Maybe it is that I am working at an Israeli food truck now or maybe it is that I am Jewish, but I do like Israel. I am aware that a statement such as this can be deemed controversial by some. This country is the most contentious Expat-terns has traveled to thus far.

However, I do have much criticism on this country too, but as the title of this posts suggests (which I do not take lightly), Israel can still change, should change.

It must to truly thrive. And, I look forward to this change in policy and management to benefit the country to exist not at the expense of others and to right the injustices that exist there.

Moreover, Israel is so much more of a mix of cultures both Jewish and non-Jewish than I could have imagined. As Sephardim are the majority of its Jewish populace, they bring different traditions and foods together from North Africa and the Middle East in a very small space, making it a yummy land indeed.

Sabich (eggplant), shakshuka (tangy tomato and egg), fish balls, grape leaves, and of course, hummus, are divine in this country.

The Arabs bring their own specialties like shawarma too, and the new immigrants to this country add their own flavors as well. I hear Ethiopian is also good here. As for sweets, there are amazing ice creams in Tel Aviv, halva (sugary brittle loaf), and rugelach from Marzipan! All are a must try.

If memory serves, the rugelach were just a few shekels. Even so, splurge on food here, but just do not get ripped off. Avoid food and drink around the Old City. 25 shekels is too much for warm fruit juice … 1 NIS (New Israeli Sheqel): .26 USD.

Visiting Israel, one may be inclined to visit all the religious sites and keep visiting them. However, modern Israel has much to offer as well, and one can easily be swept up in Jerusalem. The Holy City is one’s usual first stop, but honestly, is not a representation of Israel like many believe. I enjoyed it, but some really do not like the city much at all. The tension, the Orthodox people judging you, and the amount of roaming Birthright groups, the city can be draining. Interestingly, Jerusalem possesses a dry heat unlike Tel Aviv, which gets more humid as a result of its proximity to water. Nevertheless, I personally enjoy a little humidity; I found Jerusalem quite dry. And, I do prefer Tel Aviv in general.

I decided I am not going to write a separate post about Tel Aviv this round. I say this because I am 100 percent sure I will be back in Tel Aviv for one reason or another. The city is warm, relatively clean, and has some beautiful residents if you know what I mean.

Tel Aviv is known for three things: babies, dogs, and gays. I cannot speak for the babies or dogs, but Tel Aviv is often referred to as a gay Mecca especially in a region and country that does not approve of homosexuality. Israel itself has gay personhood and existence relatively dicriminalized; however, the far-right and religious still hold their prejudices and power in the Knesset (parliament). As a result, Jerusalem does not hold the same views and provide the same level of comfort as Tel Aviv.

As I am going to return eventually, I am also not going to touch on much about the conflict/occupation in this post either. I do not think this is the proper format. I would need to dedicate at least a series or so of posts with interviews to thoroughly address this discussion. Dialogue must be made; I have found this is one of the most important aspects to conflict resolution, reconciliation, and management that we often forget to utilize. However, there must also be truth – hard truths. Nevertheless, I will say, (especially) shame on you, Europe and UN. Shame on you drawing up borders everywhere and not understanding ethno-religious/linguistic geography beforehand! Not that there is not blame to share … But, more of that later.

One of the most fascinating aspects of the trip was Yemin Orde, the original youth village and model for ASYV. Today, it serves not orphans from the Holocaust, but underprivileged and at risk newcomers to Israel including Ethiopian, Russian, and French Jews. However, Yemin Orde is not exclusively for the Jewish people. It is a place for children.

Touring there, I learned much about the Ethiopian Jewish experience and really connected with their story. Not the fleeing Ethiopia on planes and living unknown to the outside world for centuries, but one of the funniest things I was told by an Ethiopian Jewish woman was that they were all surprised when they first arrived to Israel that 1) the temple was gone and 2) there are White Jews! What a lovely sentiment from a fellow non-White Jew!

Another incredible place we visited was Givat Haviva. A place for shared society, Givat Haviva strives for education and peace, teaching Arabic to Jews, providing history and context for its visitors, maintaining libraries, and creating relations with its surrounding kibbutzim and Arab townships. Together, we went with a representative (a wonderfully funny Welsh woman) into the West Bank. Yes. That West Bank. Everywhere she went people welcomed her with smiles. In the towns of Bart’a (as the green line now divides the town itself into Israel and Palestine), trust is being planted by individuals. Regardless, the case of Bart’a is not representative of the entire Palestinian narrative, especially Gaza, and even the idea that this town is broken into two is heartbreaking and ridiculous to comprehend fully. But, it is a start, and we must start somewhere.

In general, safety is a concern for many who come to Israel, but as long as one is prudent and watches his or her belongings, all will be well. Of course, some occurrences are not foreseeable, but even in the West Bank, no one felt unsafe. Well, we were walking a bit in the road, so I felt unsafe for jaywalking … However, I see as Western visitors, it is not us who feel the most unsafe in the state.

As Israel is young, it is no surprise that it is going through a bit of an identity crisis right now. Before, Israel strived to make everyone “Israeli” much like the United States tries to make everyone who resides more “American”. However, people now are realizing there is something missing: Slavic roots, Spanish roots, Germanic roots etc. Maybe as a young American, I also can empathize with the country for this reason. Either way, it will be interesting to see how these identities will develop and who will support them and how … That is for next time I suppose. Again, there will be a next time, and hopefully my Hebrew will be better next time too.

I was talking to the rabbi’s wife about my connection to this place; I do feel a relative connection. I do also think it is just amazing to see this many Jews in one place, but also I do not like to force sentiment (although I respect the feeling when authentically forged). I do not have a strong relationship with the country, nor does my family. When I stepped off the plane at Ben-Gurion, light didn’t erupt from the ground and my pores didn’t open and shine glowing golden streams of Judaism … Oy vey. No.

I was just happy to be off the plane where this one Hasidic guy kept stepping on my feet.

But back to the point, this is a special place, and I can see that.

So, the trip is finally over. Well, it has been over for a few days or so. Nevertheless, I am still processing it; there was a lot in only about 16 days. I have learned so much about different, but related two countries, but also protocol, maintenance, and creation of ideas to meaningful works.

For now, I will be in Vancouver for the remainder of the summer, and now have the time to actually write about this city. I will try to show you how great the summer here can be, mixing tips for events, attractions, and restaurants to enjoy in Canada’s West Coast capital. Stay tuned. There is more to come.