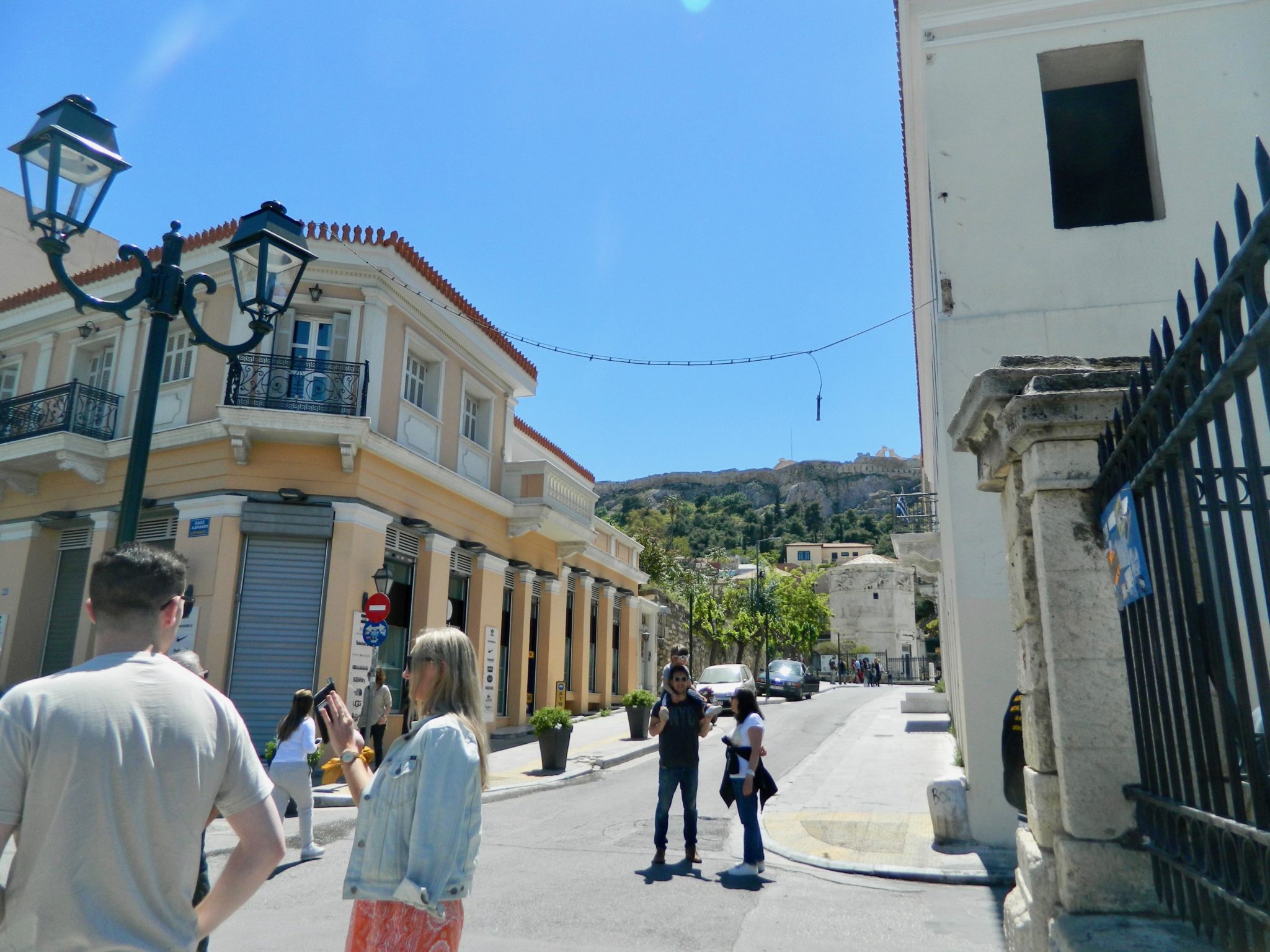 Enjoying a destination is always special when one is there while people celebrate a local holiday. As one might expect, Greek Orthodox Easter is one of the biggest days of the years in Greece. I mean, ‘Greek’ is in the name!

Greek Orthodox Easter is not all that different than other Christian varieties of the apparent resurrection of Jesus. This sect just uses the Julian calendar in place of the Gregorian, so the dates do not align. In their theory, it must fall after Passover (woot, Jews!) in comparison to Western Christian groups who sometimes have Easter appear prior to this Jewish holiday.

For this reason, arriving on April 28th, 2019, I was subject to Easter weekend, again, after having spent one already in València, Spain.

As a result of May 1st (International Workers’ Day or May Day), this extended weekend block is often rather leisurely in Greece. Local Athenians tend to leave for the islands (i.e. Crete) to celebrate the extra long weekend, which leaves Athens relatively deserted.

Visiting at this time has its pros and cons, which will be discussed in this article from what I experienced and learned from my hosts and locals while visiting. Obviously, certain sites and activities are recommended in regard to Athens’ many monuments. But, what is a solid way to navigate Athens during its holiest (aside from Christmas)? There is the question …

Do: Eat to Your Heart’s Desire

Easter is a time for family in Greece. And, Greeks are known for their hospitality. Factor these tendencies together, and it is likely that you will be fed in some way or another during this holiday if you know any Greek person.

I stayed with the lovely Alberto who is a co-owner (with his boyfriend) of Square Athens, an all things food business that has catering, private lessons, and consulting, so to my surprise after a nap, I was greeted with homemade moussaka from a recent lesson, fresh salad, orange cake, fava bean paste with truffle oil and caramelised onions, and Cretan cheese pastries (Sarikopitakia). It was a glorious Easter meal! And, this was my first moussaka too, and I can see why people love it!

Restaurants will be open most of the weekend, so no worries if you do not have as culinary-inclined hosts yourself. However, not all taverns and bars will stay open very late, so be sure to schedule perhaps an early lunch/dinner.

One aspect I did not expect from Greek dishes was the sheer portion size in comparison to what I am used to in Lund, Sweden. Food is plentiful!

For a down to earth meal outside the bustling tourist district, I recommend Telis Steakhouse. It mostly only has pork dishes (sorry kosher and halal fam), but also a variety of affordable wines and huge salad portions. It was one of the few places open later in the evening too on Easter Monday.

Another decent location for a full meal is Karyatis Cafe • Meze Restaurant. A bit more touristy and close to the Acropolis and Hadrian’s Library, enjoy traditional meze, preferably with friends here. This style of eating is meant to be enjoyed together!

Do: Lower Your Nightlife Expectations for Athens

Unfortunately, the nightlife during Easter weekend and the days to follow are mild compared to typical Athens’ standards. Since most Athenians leave, there is just a smaller populace left that likes to party. Greeks tend to get down until the sun comes up and even later, so they also start going out far into the evening (around 2AM).

During this weekend, do not expect some bars to be open, as they know that there will not be a lot of traffic. Also, do not expect anyone to be out on Easter Sunday before 12 AM. On Easter Sunday, most Greeks are at cultural festivals or with family and will go out later toward 1 to 2 AM at the earliest. I was clued into the right rhythm from a bored bartender at Beauty Killed the Beast outside of Gazi (the gay neighbourhood) when I was literally the only patron there for an hour.

The bartender was very sweet and even gave me a drink on the house since it was in his opinion, the worst time to be in Athens. He also filled me in on the happenings around the area and revealed to me just how dead the area was that night.

With sophisticated drinks and a mature atmosphere, this bar might be a nice option to go to around 1 AM before attempting to head toward the clubs. You might even start up a conversation with some cool mixologists!

So, while Athenians might think Easter weekend is dull party-wise. If one is not used to the typical Athenian mad dash out, Greek nightlife will seem still pretty active. Everything is relative.

In total, I went to two clubs during the week I was in Athens: Sodade2 and BEqueer.

Sodade2 is one of the premier gay clubs in Athens and in the heart of the Gazi district. Monday nights are Greek nights (as in they only play Greek pop hits), and it gets absolutely mobbed even on Easter Monday.

By mobbed, I mean that it becomes impossible to move within the club until around 6 AM when it starts to empty out. Apparently, the streets around Gazi are usually even this congested if that is any indicator of what most Athenians are familiar with on a night out.

As someone who is not used to being packed in like a sardine, ‘Easter weekend busy’ is busy enough for me.

On the night of Easter Sunday itself (i.e. Monday in the early AM), I wandered into BEqueer, which is more so a bar than club. It hosts drag shows and has a more alternative vibe and small elevated stage, so come ready to dance at least a bit. It reminded me of the clubs I usually go to in Vancouver. Sigh. I miss home.

However, be careful in these venues for pickpockets/thieves. It is not unheard of for people to lose bags and jackets after placing them down for just moments. In the ensuing mob on the dance floor, it is near impossible to search for one’s belongings if they go missing. Oftentimes, bartenders will hold your things for you if there is no coatcheck, so ask nicely!

BEqueer is close by to Sodade2 too, so if the vibe is not right at either, there is an easy alternative!

While one should not lose hope regarding having a fun night out, it should be said that Greeks can be a wee bit cliquey in the clubs. Do not expect to make many (if any) bar friends unless you speak Greek. Large groups that go out tend to mingle amongst themselves, not branching out.

If everyone else is doing it, shouldn’t you too? Not the best advice, but it holds up in Greece.

As the rest of the city is in vacation-mode, you should be as well. The typical pace of city life is usually more reserved than one might expect in a national capital, but it will seem like almost everyone is enjoying a Greek coffee or cocktail in the sun during this weekend.

I found a simple alternation of heading to the more touristy centres and relaxing under an umbrella to be the right idea. The touristic areas are not the ones that are less populated since the tourist season starts during this time. So, it is preferable to explore outside the centre and go where (theoretically) more of the locals would be if they were there.

Athens will not look like a ghost town, but comparatively, take in the relaxed atmosphere there while you can! It will not last.

I also recommend making friends via Couchsurfing hangouts. Athens is full of travellers at all times, and during Easter, they too are seeking companionship and revelry. Indulge a bit and keep your plans open for what might come on a spontaneous night out!

Do: Take Care Around Syntagma

Named after the first King of Greece, this square and the adjacent neighourhood surrounding it are the epicentres for political and social revolution in Athens and the nation in general.

The square’s name in Greek translates literally to ‘Constitution Square’, and rightfully so, as it houses the Greek Parliament. One will also see the increased police presence here for that reason.

Greek protests tend to centre around this area, in particular, the recent 2010 anti-austerity movement in relation to the debt-crisis took place here. It still is somewhat of a hotbed of political action, which is 1) pretty neat and 2) a place where it might be possible to get stuck in the middle of something you do not want to be in.

That is not to say that all demonstrations turn violent at Syntagma. The May Day observation and transportation strike take place at the square as is custom. And, these annual events are relatively mild-mannered. However, one will definitely witness the sharp spike of people in riot gear around this area on May Day, so just be careful and if you do not like the police that much, maybe avoid this neighbourhood in general.

Greek Orthodox Easter might seem like a double-edged sword for travellers. It is possible to experience one of Greek culture’s most important and festive times with fireworks and sparklers in the streets and candlelit marches. However, Athens is also out of her usual rhythm, so the typical Greek experience is difficult to find.

Personally, I think everyone should just jump on the opportunity to visit during this holiday. Why not? The start of the tourist season is a great time to hit up a location before it gets too busy, the weather is generally good this time of year, and Greek hospitality+Easter means joy all around. Perfect combo for all.

Oh! And, finally, don’t forget to say καλό Πάσχα (Kaló Páscha) ‘Happy Easter’! P.S. The ‘ch’ is like the one in Hebrew!

I would have loved to visit some Greek islands while I was there. There are some close to Athens, but I just did not get the time to schedule any ferry rides. I guess that will be for next time! Plus, I am headed to Cyprus later next month, which speaks Greek and is an island … So … that is sort of similar to a Greek island. Other than it being now sovereign. But, sovereignty and Cyprus (which are complicated to discuss together) are something for another day. Now, it is time for Fado, bacalhau, and street cars. Lisbon, here I come!