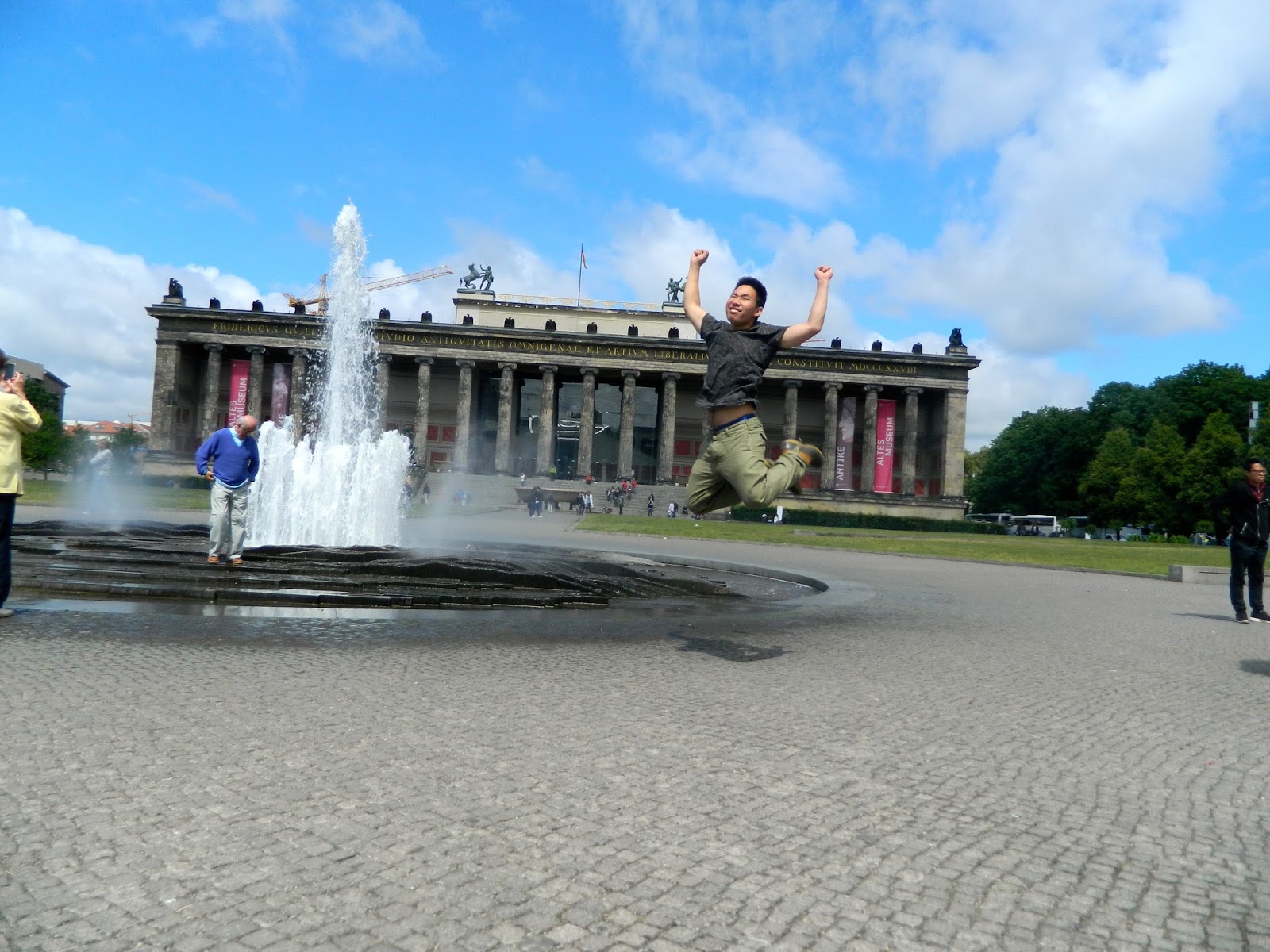 Arriving at the Busbahnhof Zentraler Omnibusbahnhof station or Berlin ZOB at about 7:30 AM this morning, the gang and I left our Eurolines night bus (which was a little overpriced for the service) that came from Amsterdam and traded it for a taxi to get to the hostel across the city.

We were/still are tired. It was 5 euros each. I didn’t want to mess with the metro yet; sue me.

We couldn’t check in until 3 o’clock officially and actually didn’t get to the room until about 4:30 PM. We are receiving free drinks though to compensate for waiting an hour and a half after the designated checkin time. However during the wait, we weren’t sedentary …

Museum island or Museuminsel is an island in the middle of the Spree River located by Alexanderplatz, housing a collection of breathtaking museums featuring art and historical pieces from around the world, some works dating back centuries.

I’m jumping in front of the Altes Museum, renowned for its collection of classical Greek and Roman antiquities. Located in front of this building is the Lustgarten or ‘pleasure garden’ (I know … too immature), which is a lovely place for a picnic and/or taking candid shots. See above.

The other museums are the Alte Nationalgalerie, Bodes Museum, Neues Museum, and the famous, Pergamon Museum featuring artworks from a variety of historical European styles and periods and artefacts and technology from the ancient world. See for yourself which looks most interesting!

We did not enter these establishments, for we wanted to get back to the hostel to check in ASAP (which did not work out) and are cheap. No one wanted to pay the fees.

If you want to visit something with a more modern edge, try the TV Tower or Berliner Fernsehturm. Located next to Alexanderplatz, the TV Tower is a site that one can ascend to see an aerial view of the capital.

Tickets are a little expensive however, but what photographer would turn down this opportunity? I did not go up in the tower (price reasons), but I did partake with fellow backpacker, Tess, in some fast food currywurst close by.

We were going to go to Stadtfest, the Gay and Lesbian festival today, but it is a little rainy, and we are so tired. Luckily, it goes on until tomorrow, and the forecast is better on Sunday! We will stop by after some more sightseeing of historical landmarks!

Hopefully, we can visit Checkpoint Charlie, try some schnitzel for lunch, and again, head to Stadtfest before it closes at 6:00 PM tomorrow. It will be a busy day, but that is not a bad thing. Then, off to the Czech Republic on Monday! Hooray! It will be cheaper there too. Stay tuned.

121. Using a little Mexican slang will get you a long way, wey.