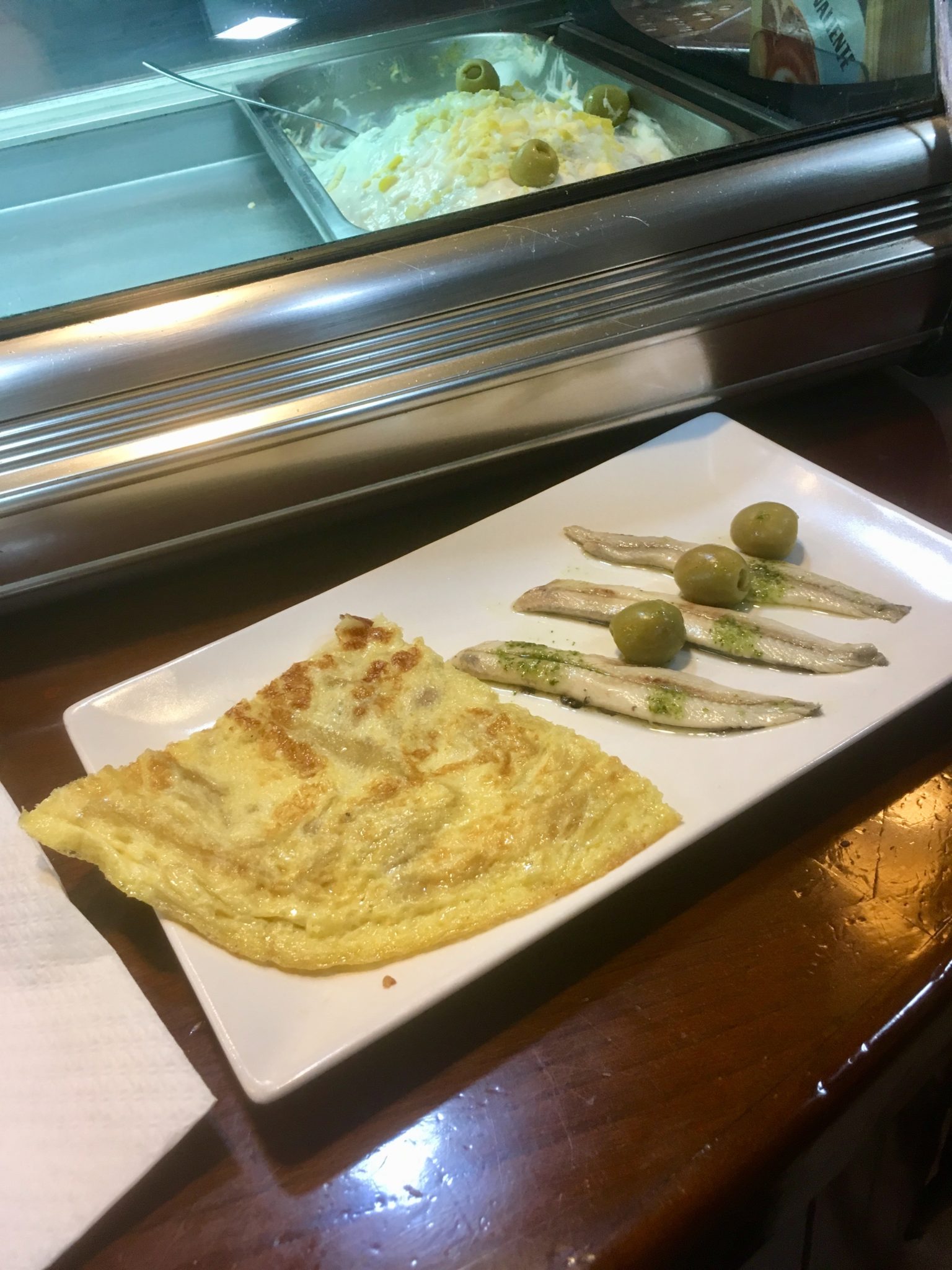 If one is looking for some classic Spanish dishes and an atmosphere to match, València is the place to go. For this reason, expect the staples along with some regional variances.

With relatively low prices and an outstanding variety, València is a gastronomic dream. And, in the way of tapas, little tastings are encouraged.

Of course, València as a whole is known for two things: orxata and paella. The former, I have written about briefly before, while the latter, I have a confession to make: I did not get to sample the OG variety!

I know; I know! I am a philistine.

Time ran out too quickly, and on my departure day, I looked around Ruzafa for a venue where I could try it. However, the issue arose — after talking to a man at Restaurante Sabors (which I would recommend from our conversation alone) — that quality paella is made naturally quite large to share and takes about ~30 to 40 minutes to make fresh.

As time was of the essence and I did not want to be too full on the plane, I had to fall on my sword and accept defeat.

What makes paella so special in València is that the rice that is used in it grows just south of the city in the albufera or ‘lagoon’ in Valencian. This area is also part of a greater national park. As a result of this natural occurrence, the dish originates here.

As I did not get to sample it, I will not talk extensively about the paella valenciana; however, I will recommend Restaurante Sabors for all those who want to try it. Knowledgeable and kind enough to try to help find a solution, the staff is friendly and well-versed in food knowledge. The menu itself is complex and varied, and besides paella, the eatery features something for everyone.

As to the location that I frequented the most, for a low-key meal, there is no place like El Parotet. Like in most Spanish taperías, it is custom to just sit down and await for attentive service.

El Parotet is no different and it caters to a local, older clientele with cheap drinks and large portions. One can enjoy all the classics here including boquerones (anchovies), seafood salad, ensalada rusa (creamy Russian salad), and fried chorizo.

The main staple here is actually the bocadillos, which cost so little, but are huge in proportion. What could be better after a monster resaca or a day at the City of Arts and Sciences?

I am known to speak fast and have a lot of the tendencies that would make a prescriptivist angry or at least annoyed: deletion of final -s, elision of d, use of a pseudo-voseo.

Anyways, Cerveceria la Plata is another tapería that caters to an older crowd and is located up the street from El Parotet. It is a casual locale with daily specials that cater more to the tourist crowd (i.e. burgers). However, it still serves a collection of traditional tapas for only a few euros per plate.

Pinchos on the Patio

Moving inward into Ruzafa, el Desván is sure to please and delight!

Meaning ‘the attic’ in Spanish, this ground-level restaurant is another laid-back choice for a quick meal. I came here right before heading to the airport and was satisfied by a paté sandwich and gambas al ajillo, which are small shrimps cooked in olive oil and tons of garlic. With a little bread, they are a perfect tapa.

For a drink in the evening, I would suggest Casa Pepe located close by! With nice cocktails that range from about 4 to 6 euros, it is crowded in the evening, so be sure to secure a table in front. This bar is also a perfect place to plan an evening out with friends.

Closer to the beach, another wonderful place to indulge at is el Rinconcillo (‘little corner’). I ventured here after enjoying the sunny weather waterside and had a light meal of meatballs and vermouth. Typical with any meal, I was give some olives (or sometimes small chips/cracks/peanuts are provided) to complement my actual meal.

The prices are rather cheap, so do not be afraid to splurge! This includes the drinks as well!

There is another type of cuisine I tried while in València, which might come as a surprise: Chinese!

Internationally, Chinese food has a tendency to change and morph into its local environment. As a result of its diversity, Chinese food also is quite complex, so it is does not have much trouble catering to multiple types of palettes.

The Chinese community in València is larger than one might initially expect. However, let’s be honest, Europe is full of Asian, African, and Middle Eastern peoples — and kind of always has been. The idea that it is some preserved haven just for White people is a strategic lie and fantasy.

When I came by to pick up my order (para llevar/recoger is what you should say for ‘take-away’), the place was packed! I recommend the duck (especially the Pato Pekín (Peking Duck)) and enormous, homemade spring rolls at Gran Dragón.

The service was so friendly and speedy! I had some trouble ordering via the phone since my service had been glitching since I arrived. So, I came early to make sure it went through. Of course, it did and was delicious and I was given some free shrimp crackers on the house. So kind of them!

Another location where I had some trouble ordering was the Tapería Pulpería Ligazón. As the name suggests, it specialises in octopus, which is one of my favourite proteins!

After a rainy sightseeing trip, I decided to try it out after doing a little research online for a warm place close by to eat.

Arriving, I was greeted by an attractive Spanish fella who inquired if I spoke Spanish. Here is where things got dicey … I said, “Sí po,” like any person would if he or she spoke Chilean Spanish. However, po is ‘a little’ in Italian and similar to poc ‘a little’ in Valencian/Catalan. And, if said quickly, it could be interpreted as un poco …

So, thinking I did not understand Spanish, he tried to explain the menu in English to me — which was awkward, as he would tell me later that he did not really speak English. This exchange was after I interrupted and just told him to speak Spanish to me and apologised for my weird accent.

He then brought me a Spanish menu (which was a nice gesture) and it was game on!

Located in El Carmen, it is a fresh, young eatery with Asian inspired influence. It is done well, combining both the richness of Spanish cuisine and oils with the spices and textures of southern Chinese dishes.

For a starter, I ordered the cheese board, which was complemented with sweet bites of dried fruits and coconut chunks. Then, it was time for the bao bun filled with grilled octopus. It was a great twist on bao — which I did not expect. Finally, I enjoyed the croquetón, which was a massive creamy croqueta.

For dessert, which I indulged in, I tried the torta de Santiago cubierta en chocolate – or almond cake covered in chocolate. I eventually realised that the restaurant also draws inspiration from Galician cuisine from northern Spain, which features octopus as a staple. This specific cake (one of my favourites ever) is from Galicia as well and is in honour of the St. James and an homage to the related, famed pilgrimage.

Covered in chocolate, I could not resist!

Other dishes that looked good were the padrón peppers, huge classic papas bravas, and grilled octopus platter (although a little pricey).

When it comes to tips for tapas, one’s intuition is truly all that is necessary for delicious success.

No matter where I went in València, I met friendly service. For me, this is the characteristic to look for in any restaurant. Good food correlates with good people I suppose.

If you do not speak Spanish, be patient and try compensate by eating in the style and right pace instead perhaps. Also, remember to round up if tipping is your thing!

Spanish eating culture is emblematic of southern European food culture. It is leisurely, rich, and often mildly alcoholic. When enjoying Valencian cuisine, remember to eat to savour, not just to stuff!

Right now, I am in glorious Greece! Athens is such an urban city that I am generally unprepared. Also, as you all will find out, I know shit about Greece. I thought I would know more, but I really don’t and it shows. I also speak zero Greek, which is lovely and super useful … I am going into tourist-mode 100% and not looking back. Stay tuned for more updates about where to, what to eat, and how to handle a laid-back post-Easter Greece!