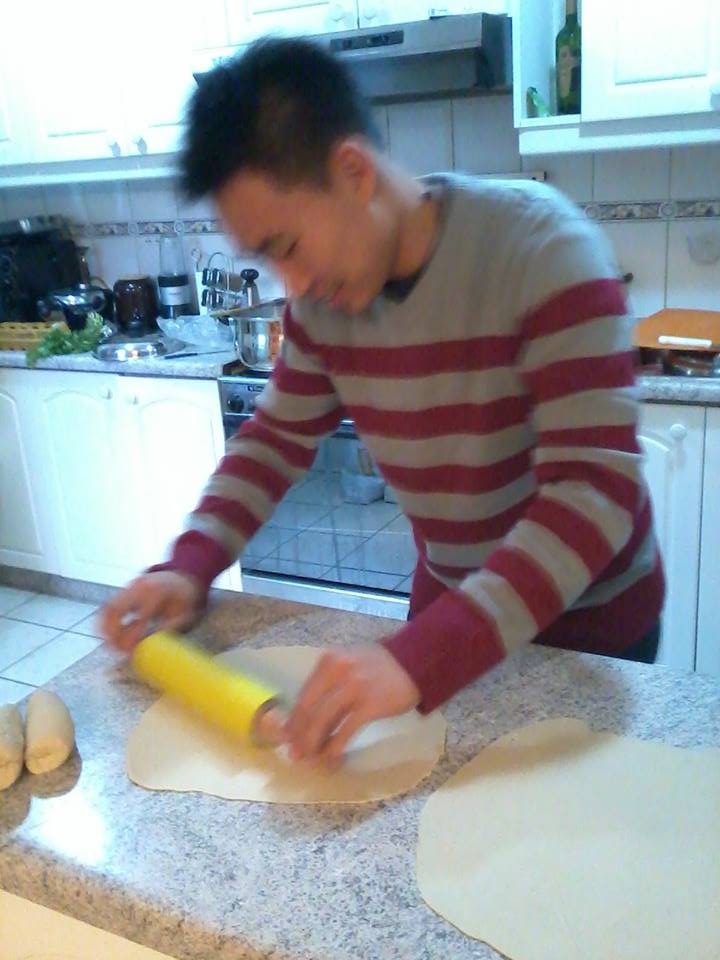 Pantrucas, Pebre, and Sopaipillas – Oh my! There are few things better than a home cooked meal on a cold, winter day. Today en Santiago, it was pretty cold – not to mention, the icy rain that came down continuously. So, I, while watching the España vs. Italia fútbol game, helped my family’s nana (housekeeper) cook up some typical Chilean, winter food.

The first thing I helped make were Panchuras. Panchuras more or less constitute ‘Chilean Dumpling Soup’. After making a quick broth of meat, carrots, and onions, you make a dough (just flour, water, and salt) and roll it out in order to cut it into strips. You pull these strips apart and throw them into the pot to cook (These are the Pantrucas). Lastly, you add some more vegetables and some oregano. The ‘dumplings’ taste a lot like Korean rice cake ‘dduk’. It was nice to taste something familiar but with a Latin twist.

Next we made the Pebre. Pebre is actually Catalán for pepper. In context, it is a spicy, Chilean salad with green onions, a lot of cilantro, lemon juice, aji (a popular, local condiment), oil, and vinegar. It has a kick to it and is really simple to make.

Lastly, we took the extra dough we had and made Sopaipillas. These aren’t your run of the mill, cheap, caked in powdered sugar Sopaipillas from your Tex-Mex diner down the street. These are hardcore, authentic Sopaipillas. They were really simple to make too. All we did was use a lid from a container to make perfect circles, and threw the dough into a sauce pan of piping hot, boiling oil. They came out crispy and savory.

Aside from gaining about 6 lbs. in one meal, I learned something about Chilean cuisine. Unlike what we Americans typically perceive as Latin/Hispanic food, Chilean cuisine is quite hearty, border-line chunky. Chileans eat thick stews, make small salads, and cook thick, fried edibles.

Not a lot of spiciness in their diet, but it is made up by saltiness and sourness. However, perhaps the Chilean diet changes immensely in the warmer months. Maybe only in the winter they eat like this. Also, I have yet to try their famous seafood.

Perhaps their seafood dishes are extremely spicy and contain totally different flavors. Is my whole perception of Chilean cuisine false? Only time will tell; however, one fact is true – this isn’t your stereotypical comida latina.

I’m going into the center of Santiago tomorrow. I’ll be sure to learn much more about Chilean culture, and possibly their food too! ¡Hasta Pronto!

55. It’s best not to be a picky eater when traveling, and personally, I think this is true about life in general. It just makes everything so much more complicated. And, complications during travel should be avoided even if they are small. It’s not the end all be all though.