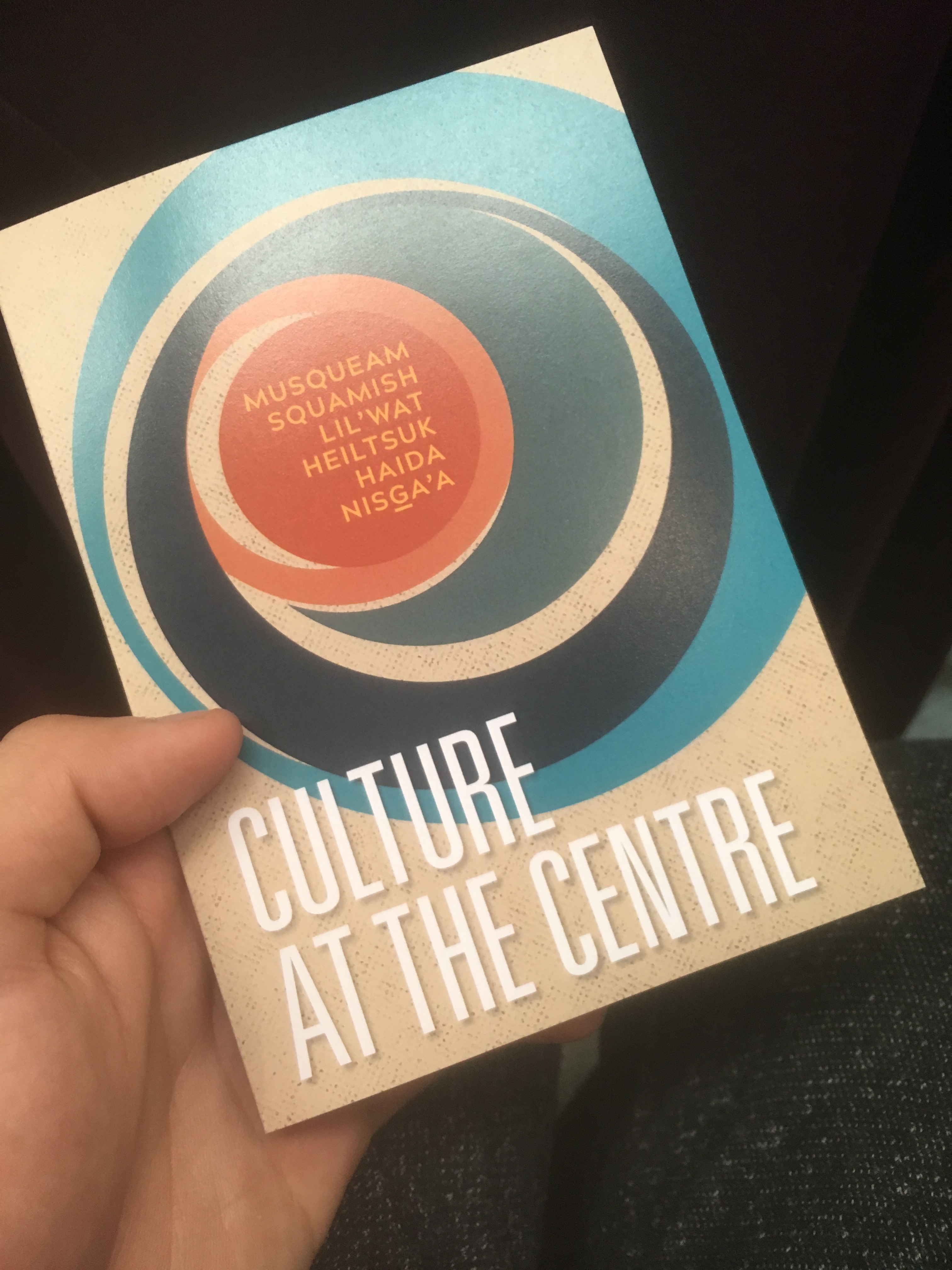 For the last few weeks, I have been quite busy working on a big project (at least for me) regarding ‘my day job’ so to speak. Of course, I am a full time student (taking 6 courses at the University of British Columbia); however, I also work along with my program the First Nations and Endangered Languages Program (FNEL) in helping make and distribute online language tools, specifically with the Heiltsuk First Nation.

Recently, our team along with the Heiltsuk Cultural Education Centre (HCEC) in Bella Bella, where we will be returning to this summer, helped create a digital tool that is now in the Museum of Anthropology. This feat is kind of a big deal? At least, I think it is.The Museum of Anthropology (MOA) is a major attraction for visitors to Vancouver. Located on the ancestral, historical, and unceded territory of the hən̓q̓əmin̓əm-speakingxʷməθkʷəy̓əm (Musqueam) people, the museum features a diverse collection of Indigenous artworks from multiple nations and ethnolinguistic groups as well as Asian, African, and Polynesian works. It is a must see with a reconstructed Haida village at its back as well as an Oral History and Language Laboratory that helps preserve and digitize older archives and record today’s speakers, more so behind the scenes.

The museum opts to call its ‘artifacts’ belongings rather than the typical descriptor, as one of the points of emphasis for the curatorial staff and institution is the capacity and relationship building aspect of the facility. These possessions were just that – possessed, someone’s – and should be treated as such.As the world has slowly been introduced to the history of and continued colonialism of museology (thank you, Black Panther),  MOA takes initiative to collaborate rather than follow the historic, conventional museum approach of making people ‘exotic subjects’ without proper accreditation.

For this reason, along with 5 cultural centres from First Nations in BC (representing 6 distinct cultures and communities), the museum worked to create, house, and foster better understanding of the rich heritage of this place in a constructive way in their new ‘Culture at the Centre’: a first of its kind, interactive exhibition featuring language and art with historical and modern references and pieces.So, this is what I do — at least what I hope to continue doing — aside from infrequently travel blogging.

For background, within BC’s provincial confines, there exists 7 distinct language families: Salish, Wakashan, Athabaskan, Algonquian, Tsimshian, Haida, and Ktunaxa. And so, there are around 200 recognized (important consideration to take into account compared to unrecognized peoples who do exist) First Nations with over 30 languages, not including dialects, spoken in this region. The First Peoples’ Cultural Council is a great resource for more information about the Indigenous peoples and their languages here. Despite this number, the province receives the least amount of funding that any other regarding cultural and linguistic revitalization and maintenance.

However, the province recently come out with the statement that they would supply 50 million CAD to help preserve this heritage (see here); however, there is a lot to be done and there are a lot of people who need assistance. We shall see how far that money goes, but for that reason, these exhibits are even more meaningful — to bridge divides, educate, and show the vibrance that exists here and has always existed here and must continue to exist. As a speaker at the opening said, Indigenous peoples have been here since the beginning of time and will be here, until the end of time. My paraphrase.

The cultures represented in the exhibit are xʷməθkʷəy̓əm (Musqueam), Sḵwx̱wú7mesh (Squamish) & Lil’wat (from a joint centre), Heiltsuk,Nisg̱a’a, and Haida, which represent Salish, Wakashan, Tsimshian, and Haida language groups. Therefore, this project as a whole was a great undertaking, as protocols, schedules, and considerations are idiosyncratic and thus complex, especially when layered together. It was exciting and anxiety-inducing to see it all come together. A large group of people came to watch the opening ceremonies, which contained cultural performances from each group and speeches by the cultural centre directors.

We snuck into the exhibit from the back entrance to make sure everything was still okay with our piece before it was mobbed.When Annie told us she could not hear the audio, we panicked. It is all there though, but just takes some to load. There is a lot of information in that little device.Sigh. But, it is done!

If you are interested in visiting, the exhibition will run from now until October 8th, 2018. Come on by!

*This post will be updated with more images shortly

And, now, we are heading into summer. Thank fucking god. First, it is back up to Bella Bella as well as hopefully some road tripping through the interior of BC. Then, it is off to Sweden for the year! What! I know! Crazy, right!? More to come soon — likely after finals and term papers. Travel more (and wisely)!