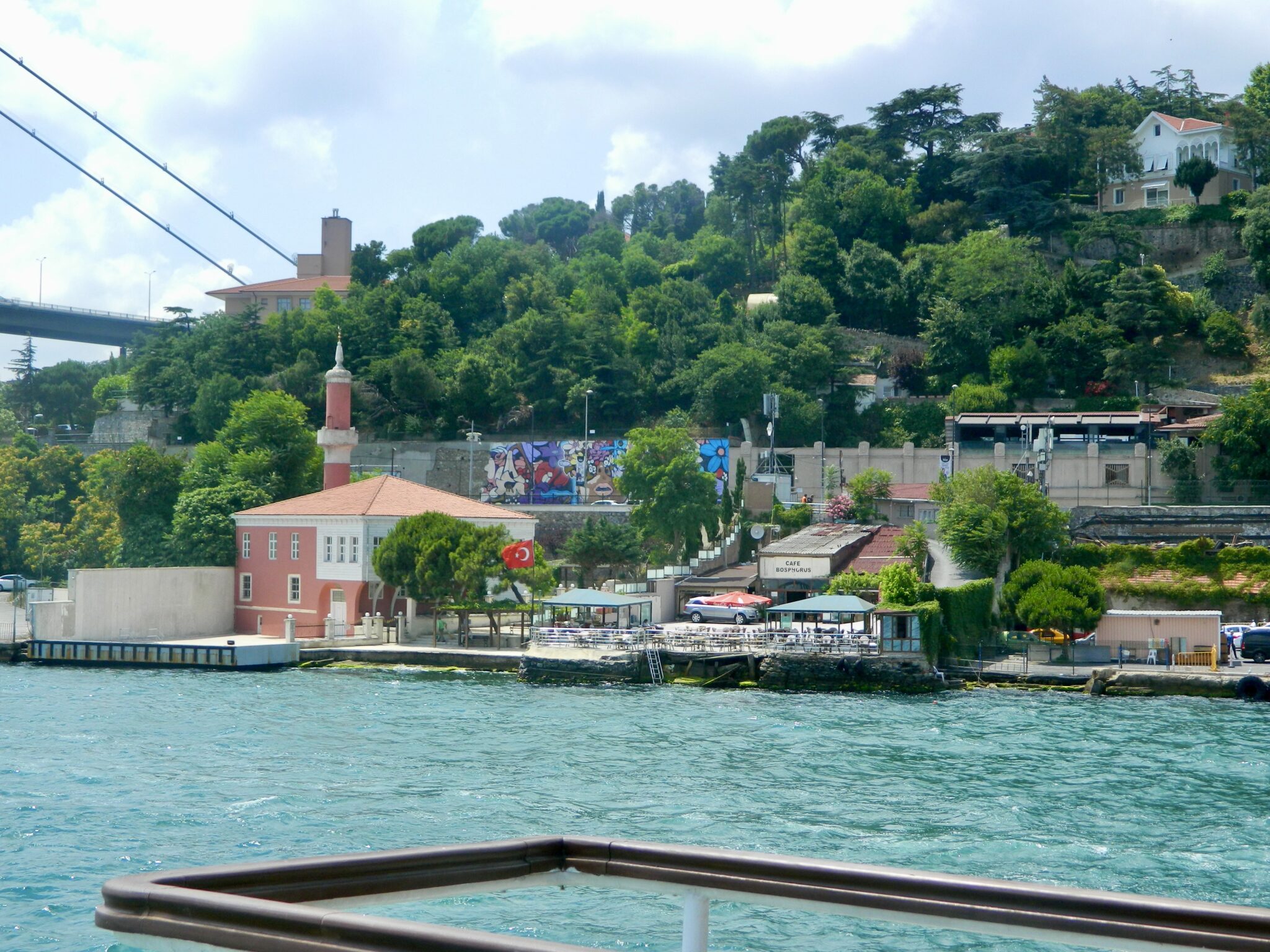 İstanbul is a big city, and each of its neighbourhoods is an adventure in itself. For this reason, each Istanbul Instalment features different tips for separate, specific areas. Continue with this post to learn about:

One unavoidable feature of the eternal İstanbul is the mighty Bosphorus, which is the vast strait that divides the city into its two sides. No trip to İstanbul would be complete without a classic river cruise on it too. And, fortunately, I am here to help guide you on this wet and wild journey!

For those departing from the European side, I recommend heading out from Beşiktaş: an affluent neighbourhood below Taksim. And, while you are there, why not visit Dolmabahçe Palace?

Dolmabahçe Palace is a major historical Ottoman administrative centre and mansion that was constructed in the mid 1800s. Essentially, its construction was a result of the sultan at the time wanting a more modern crib than Topkapı Palace.

Today, it serves as a not so modest tourist destination that features a royal aviary, gardens, and additional harem (not in use), which, you guessed it, costs a little extra to enter.

To enter Dolmabahçe (Dolmabahçe itself means ‘filled garden’ in Turkish), one needs to purchase a ticket for 60₺ (and 40₺ extra for the harem ticket). Combined, one can purchase the package for 90₺, which includes entry to the clock tower.

Audio guide is included! And, there are cashier boxes easily marked at the entrance, and lines are usually short.

I would strongly suggest paying the little extra for the harem. It is quite opulent and regal to see, and you will get the opportunity to visit where Atatürk himself had his final moments too.

After spending enough time in Turkey, one will assuredly start to wonder who is this Atatürk guy and why is he so popular?

Well, his name sort of says it all. Ata means ‘forefather’, and Türk means … well … you can guess for yourself. (Literally, it means ‘father of the Türks’.)

Anyway, Atatürk is the modern founder of the Turkish republic and is generally hailed as a great leader. He was a secularist (in contrast to the current regime), but his nationalist policies were harsh to ethnic minorities in the emerging nation. Although, he did also establish universal suffrage in the country at a time when it was quite uncommon internationally.

Generally, he is quite beloved in the country, so it might not be wise to speak ill of him there.

Atatürk died in Dolmabahçe Palace in the early morning, and the clock in room where he passed still reads the time of death: 9:05. The room in question is clearly marked when among the many suites of the palace.

While inside the harem, it is also mandatory to where protective shoes to not damage the carpet and generally refrain from photography where prohibited.

Dolmabahçe Palace is still a place to dress respectfully, especially given its history, but additional religious coverings are not required. It is wise to bring one or two layers for the cruise later though!

Spend the morning wandering its expansive grounds and see how lavishly the sultans lived! (And, be a little jealous.)

To make the right cruise up the Bosphorus, head to the Beşiktaş (Ş.Hatları; Kadıköy) dock by the Shangri-La Bosphorus İstanbul Hotel. There is another dock close by, but the full cruise will depart from the one directly beneath the hotel; go here.

There, you will need to buy the Şehir Hatları tickets for the scenic, slow full ferry ride up the strait.

I recommend the Full Bosphorus Cruise, which is a no fuss ferry to the small, isolated fishing town of Anadolu Kavağı about two hours away from the city centre.

The boat itself is spacious, and there is no assigned seating. On a sunny day, it is a relaxing ride with ice cream and sweet sellers on board. This tour is popular not just for tourists, but also local families. It is a comfortable experience; Nina and I even took a sun nap on the top deck.

There are also cushioned seats below deck too.

Prices are quite fair (haha, fair, fare), but be sure to keep an eye on the time while in Anadolu Kavağı. Do not get left behind! Worst-case scenario, one can take a different ferry to Üsküdar as a final destination from Anadolu Kavağı to get back to metropolitan İstanbul in a pinch. However, there might be an additional cost/ need of embarrassing explanation of why you are taking this alternate route back.

The typical full cruise embarks at 3:00 PM from Anadolu Kavağı, which gives you about three hours in town.

Anadolu Kavağı is an old strategic Ottoman settlement. However, today, it mostly home to many friendly stray dogs, handcrafted arts and traditional souvenirs, and its delicious, fresh seafood. There are a few local residents (mostly fishermen), but the population is probably not over 2,000 even on a full day.

On rare occasions, Croatian goddess Nina will become momentarily pescatarian if the seafood is local, fresh, and sustainable. Anadolu Kavağı was able to check these boxes for her to sample some of its specialities.

While there, I highly recommend stopping by Lakerda Balık Evi in the centre of town on the corner of Macar Tabya Cadessi. Nonchalant with friendly outdoor grillers (as is custom here), they sell moderately priced and simple grilled fish sandwiches (balık ekmek), skewered mussels with tartar sauce (midye tava), and of course, lakerda (preserved bonito) and calamari (kalamar).

Nina and I were both a bit hangry after a cruise nap, and this food was exactly what we needed. There may be fancier restaurants in Anadolu Kavağı, but Lakerda Balık Evi is the perfect mix of casual and welcoming for a laidback day.

Anadolu Kavağı is known not just for its foodstuffs, but also the Yoros Castle. This Byzantine ruin is a bit outside of town, so be sure to hit the ground running to make it back to the boat in time if this edifice is one’s goal.

Get to Tuna Cadessi from in town and just keep going straight until you see the castle / the nearby observation deck!

Personally, I would recommend just hanging around town. There are many cafés that sell waffles, crêpes, coffees, and sweets, and it will not be hard to find a decent gift shop too. I purchased some lovely tinned soaps for friends and family, which are perfect gifts because the containers are treasures themselves. Prices might be a little higher than expected, but the shopkeepers are quite friendly and have a tendency to offer free knick-knacks too on slow days.

While in Anadolu Kavağı, Nina and I also got caught in an above average summer spell of rain. It put a little damper on the experience. However, we did get to know the locals better who were also escaping the deluge under parasols.

Summer showers are not uncommon, so prepare yourself for a little volatile weather. Anadolu Kavağı is certainly more walkable in the sun, but it can still be enjoyed in a drizzle.

Do not fret either; these spells do pass in an hour or so usually. The cruises have covers too, so a little rain will not ruin the ride back either.

It is rather outstanding actually. Anadolu Kavağı is right next to the Black Sea. Even on a modest day cruise, one will travel quite the distance from the city centre. This experience is worth the time and marginal effort to plan one hundred percent!

Arriving back, one has the option to disembark in Eminönü, south of Galata, the final stop or back in Beşiktaş. Üsküdar is another option, which is likely more convenient if one is staying on the Asian side or perhaps wants some happy hour drinks in Kadıköy!

And, that is it! Our last İstanbul instalment! Wow, it took me a bit to write these up; I am so glad I finished though. İstanbul was an amazing experience, and I am so happy I could share it with Croatian goddess Nina and you all too now. Next up, we are heading back to Edinburgh, Scotland — to discuss what makes it such a gay haven! Stay tuned for more!

One thought on “Istanbul in Instalments: Taking a Bosphorus Cruise & Exploring Beşiktaş”