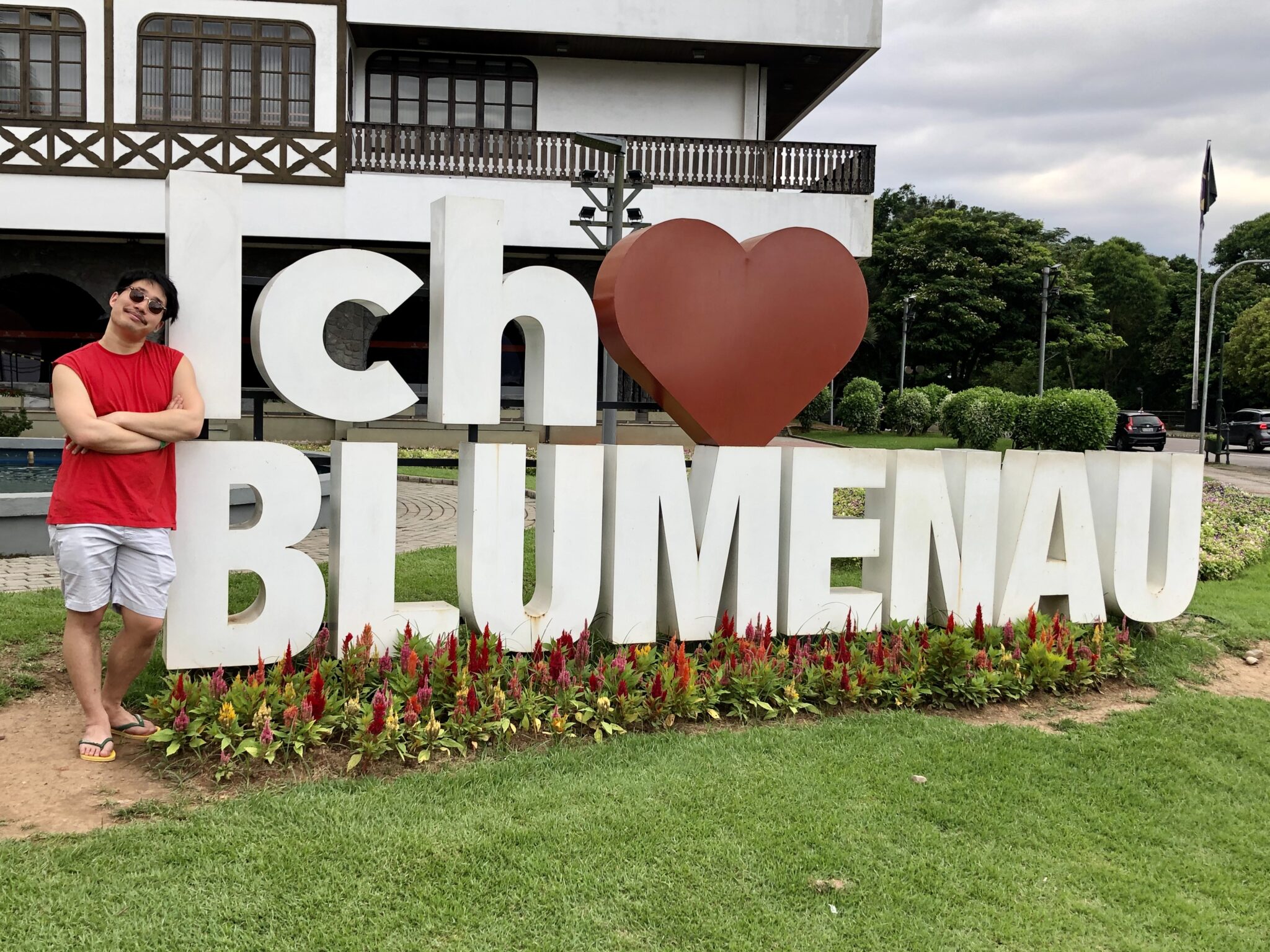 Recently (before COVID-19 pandemic lockdowns), I was fortunate to find the time and funds to head south to a country that was new to me at the time: Brazil. Having communicated for a while with a man I met in Vancouver, I took the leap and landed myself in the southern state of Santa Catarina.

This trip is Expat-terns’ first to this massive, diverse South American country, and I could say a lot. Like most countries in the Americas, Brazil has a colonial history and legacy. It also currently has one of the worst leaders in the world, running the country. #ForaBolsonaro

However, setting off, my mind was on one thing, o homen com que tava ficando, which is a term I will address in a later post. Also, pão de queijo.

The state of Santa Catarina is one of Brazil’s southern districts. The capital is Florianópolis on the coast, made of up islands, with its own distinct accent too. The rest of the state is rather spread out, but contains smaller cities with more wealth from shipping and tourism on its luxurious coastline. It is generally considered one of Brazil’s wealthiest states overall.

One major aspect that visitors will definitely notice in Santa Catarina and Blumenau in particular is the German influence. The state had large waves of German and later Italian immigration, which is reflected in the heritage of many of its residents, language, and regional cultures today.

Thomas, who I visited, is of German descent himself and even still speaks German with his family. And, most can trace back their heritage to the Pomeranian area, close to modern day Poland. Some also come from southern Germany.

Blumenau is a bit more difficult to get to than one might expect, given that it does not have a formal airport. See my other post on how to get to Santa Catarina for more information, but be prepared for a little domestic travel from a close by municipality to finally get to this city.

Arriving in Blumenau, one might also pass through Pomerode. This town is actually considered the ‘most German’ in all of Brazil. However, some argue (like Thomas), this title does not live up to the hype. Blumenau itself is quite German too, but does not hold the status of ‘most’.

In Blumenau, this historical, cultural mixture finds its way into every one of your senses.

People speak perfect Portuguese, but the architecture, signs, local foods, (and dare I say blond hair) might make you think you are not just in Brazil.

The local beer is Eisenbahn; the main shopping mall is Neumarkt Shopping; and, the city boasts the largest Oktoberfest in the Americas. Kann es mehr deustch sein?

Visually, wood framing is common affixture to buildings to give them a more traditional and old-timey feel. It is almost Bavarian. Even going down Main Street, it is not surprising to spot a few places with this look as well as historic buildings that have sported it from the beginning.

Despite its regional customs, however, cultural tastes and styles are still undeniably Brazilian. Residents take great pride in national classics like caipirinha (a strong fruity cocktail made with cachaça or other alcohols) and brigadeiro (truffles served often at parties). Musical preferences also are definitely Latin American.

Blumenau’s best club is probably Factory, which dishes out a wholesome nightclub experience with what you would expect from a Brazilian disco. Ludmilla, Pabllo Vittar … you name it! Did I mention it is also a gay bar? The other gay bar is Queen with an edgier vibe.

It is common locally to drive to the coast and head to the beach bars and clubs in Balneário Camboriú on the weekends too. However, the prices there are more expensive than staying in town.

Factory actually has two locations. One is a sit down bar with board games and themed nights, and the other is the famous club. The bar was the first establishment actually, but it got so popular they had to open up another location just for dancing. At the Beira Rio location, they serve up really affordable and delicious sandwiches with decently priced drinks too. It is great for a quiet night out.

For more upscale night eating, Curt Wine & Bar has a more small-plate feel and outside seating. Enjoy from their huge list of cocktails and modern spins on Brazilian classics like pastéis (pastries) filled with ossobuco.

During the day, Cafehaus Gloria is the place to go. It has a massive dessert buffet with tea sandwiches and other delicables all for less than 100 Reais (sing. real). This buffet-style eating is typical in the city and region, especially during lunch hours.

Unfortunately, Carnaval (one of Brazil’s biggest attractions) is not widely celebrated in Blumenau. Residents get the time off, but Oktoberfest is the bigger holiday. Carnaval is still celebrated in Florianópolis, Balneário Camboriú, and Navegantes. Navegantes also has a huge gay Carnaval, locally called ‘Nava-gay’, which attracts many tourists and locals to its saucy blocos ‘block parties’.

While Thomas is a local, we decided to book an Airbnb for us both to stay in to not overcrowd his family abode. When visiting Blumenau, hotels are also popular, and during the off-season it is easy to find nice accommodations. Closer to and during Oktoberfest, it is more of a scramble for lodging. Our accommodation was close to the city centre, which was perfect for me as a tourist and also Thomas who works close by.

Tourist attractions in Blumenau generally centre around its German Folk Village or Parque Vila Germânica. The site operates all year round, but in the off-season, the streets are nowhere near as filled as during the 18 day festival in the fall. Come here for good schnitzel and beer tastings!

Close by in the neighbouring city of Jaraguá do Sul, Parque Malwee also attracts a crowd. A large nature park with paddle boats for rent, sports fields, gazebos, restaurant, and a dining hall with large German-inspired buffet, Parque Malwee is a very family-friendly excursion.

The park is a product of a business called Grupo Malwee that constructed the attraction as a sort of community-boosting initiative. It is popular during the weekends for people outside the city of Jaraguá do Sul too. (Fun fact: there is no Jaraguá do Norte … despite there being a ‘southern one’.)

If you are lucky, you might even get to see some capybaras / capivaras there; however, they do not always make an appearance. Mind your distance with these cute animals though. Reports from the state show that attacks are more frequent in the summer when the calves are young. They also carry ticks … (Thomas would not let me hug them.)

Blumenau is a great home base for multiple excursions in the region itself. Its proximity to the coast means that day trips are easily plannable. (Especially, if you have a nice fella driving you around.) That said, driving is pretty typical and the easiest way to get around and between cities. Invest in renting a car or travel with someone who has one when visiting.

Outside of the big names, Rio, São Paulo, even Porto Alegre, I would recommend stopping by Santa Catarina’s Blumenau for a taste of something different. It will break your assumptions of Brazil, but in a good and necessary way. This small city is friendly and the pace of life is perfect for a relaxing vacation. Rio and São Paulo are popular places to visit (for Brazilians too), but they are massive metropolises. Blumenau has its own reserved charm with areas of interest and a perfect location for exploring the area.

More to come about the lively coastal cities in Santa Catarina and other aspects of Brazilian culture! I hope these posts inspire your wanderlust while indoors during this trying time for us all. Stay safe, lave as mãos, and travel (when it is responsible to do so)!

4 thoughts on “Beautiful Blumenau, Brazil: A Bit of Tropical Germany”