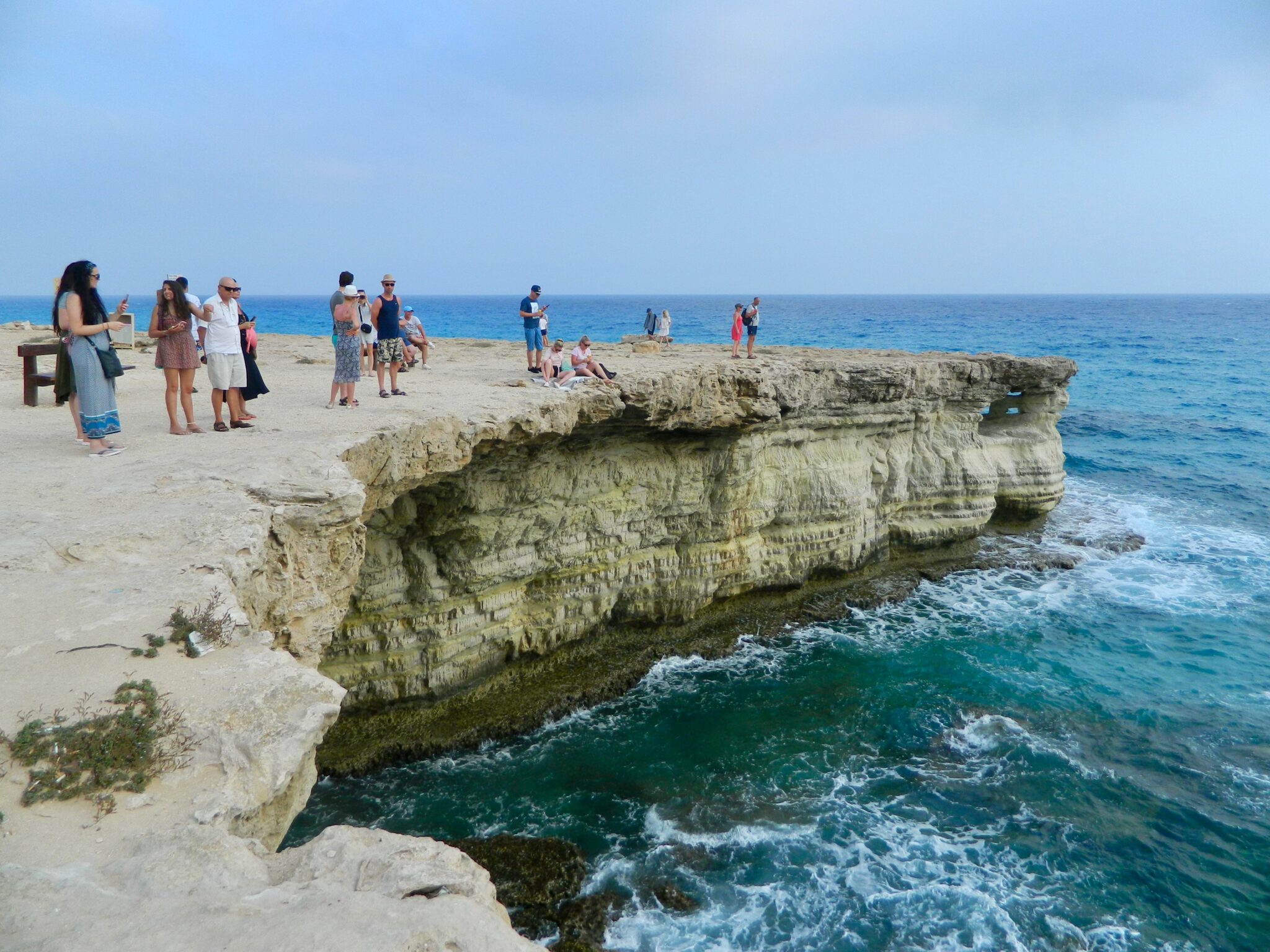 As mentioned, getting from Point A to Point B in Cyprus is not as easy as one might expect. Nina, Croatian goddess and I, opted for the popular Intercity bus. Most locals drive, but these buses are pretty reliable and are used by Cypriots too, especially young ones.

So, we were off, from Paphos on the western edge of the island to Ayia Napa on the east coast. Unfortunately, this route was not direct, so we had to stop close to the Nicosia border and take a connection to this other, well known resort town: Ayia Napa.

Ayia Napa is more concentrated than Paphos. Its main strip is littered with a mix of traditional Cypriot restaurants, beachwear shops, ice cream parlours and the like for mostly British and Russian tourists.

Unbeknownst to Nina and I, Ayia Napa is rather well known in the United Kingdom as a hedonistic wonderland for 18 year-olds who want to let loose. There was a popular television series that featured hidden cameras for parents who wanted to spy on their rambunctious children and then confront them afterwards: Sun, Sex, and Suspicious Parents. Lovely.

The town is still privy to this sort of clientele.

While there, Nina and I stayed at a lovely hostel, which was more like a hotel called Paloma Hotel Apartments (22 Demokratias Street).

More so a hotel, Paloma features a quaint pool and full bar with some obscenely good drink specials. The staff is also lovely, friendly, and informative.

Much of the clientele is lads from England on stag (bachelor party) or who have just graduated. For this reason, there is an addendum that if the workers feel that a party has become too rambunctious or destroys anything, they will be automatically charged for damages and recklessness. Smart move, tbh.

The rooms themselves are air-conditioned and spacious. They are apartment style in nature, so enjoy the privacy. Wifi is limited to the social spaces however, probably as a means to drive up food and drink sales. Also, a smart move on their part.

The kitchen is good for a quick meal, but for a true Cypriot dinner, we recommend heading across the street to Napa Tavern or down the street to Stamna Tavern. The menu at Napa Tavern is impressive, but the service and homey charm of Stamna are unmatched!

It sits in the oldest house in Ayia Napa and is fully family run. The portions are filling, and they have a free-drink-fo- a-review deal, which one should definitely take up. Both times that Nina and I went there, we enjoyed a few compliments on the house too. And, even when we were short on cash (terrible I know), they were understanding.

*I went back after hitting an ATM to pay in full, which prompted the owner to give me a little hug. I do not skimp!

As a result of how touristy Ayia Napa is, I did not feel any shame in frequenting one establishment that had great service and authentic food. It is better than the Hard Rock Café even further down the road, which does get some business!

Also, Stamna is more or less a reprieve from the younger crowds who are just looking for pizza and fish and chips. Expect families and older folks to gravitate toward this and other venues like it for a more refined, quieter start (and end) to the evening.

As one might expect, as result of the onslaught of young, drunken fellas, the club scene is … horrible. I mean this in the worst way.

And, sadly, LGBT representation is non-existent. At least, I could not find it. The venues and establishments in Ayia Napa gear more toward a straight, cis-crowd, so other queers, prepare to swallow your pride and enjoy music that is difficult to dance to (and gratuitous heterosexuality).

Nina and I ventured into the main club strip around Grigori Afxentiou street one night, but we did not return the next. In one club, men started carelessly urinating on the dance floor itself. Yes, they started peeing, just whipping their genitalia out.

We fled, on foot. Nina was wearing partially open-toed shoes. We did not return to the strip; how could we?

If the nightlife is not one’s cup of tea, then the beach is likely where one is headed if in Ayia Napa. Most of the town lines the coastline, so it is not difficult to find a nice vantage and sandy spot during the day.

One of the most popular beaches is Nissi Beach, located on the western edge of the town. It has crystal clear water on a sunny day as well as a small isthmus that is popular for photo-ops and traversing at low tide.

After a pleasant stroll from the centre of town, Nina and I settled down for a few minutes here before heading to the adjacent hotel resort for something to eat. There are some other beach bars around, but we wanted to sit down and eat something more substantial. Sadly, the service was terrible and on the racist side …

Nissi Taverna is very beautiful, but we had a waiter who, I think, had a vendetta against us after I called him out for speaking mock Chinese to me.

It is the tale as old as Orientalism …

This wonderful equation happened to us, well, to me when we sat down at Nissi Taverna. When the waiter came, he gave a bit of shit-eating grin and promptly Ni-Hao’d me, which was odd, since Nina and I both spoke English to him a moment prior.

I told him that he should not do that to all Asian customers because we do not all appreciate it, which Nina supported. The server then got offended and he informed me that it is Chinese for ‘hello’. It was uncomfortable to say the least.

He took our orders, but then it took over an hour to receive a souvlaki and calamari … which seemed intentional by the end of it. We flagged down another waiter, and he was shocked that we were still waiting for food.

After that, the original waiter returned and was apologetic. He graciously provided us with — free water — and our meals arrived twenty minutes later. It honestly seemed like he was getting back at us (or me for my remarks) and then was caught, seeing how he was miming/interacting with the other waitstaff at a distance.

Yeah, I would not recommend dining at Nissi, given the lack of service and attitudes. Although, they do have an impressive lunch buffet.

Sadly, by the end of this ordeal, it started to rain! So, Nina and I had to retreat from the beach without spending that much time in the water or sun.

Getting back to the centre of town was tough as well as the rain made the buses a hot commodity. Luckily, taxis also lower their prices for combined rides when it gets busy like this, so Nina and I took advantage of the deal and hoped in with a couple of other people.

I was still a bit down from lunch, but at this point, Nina wanted to stick to the schedule and keep trudging onward to the next activity.

Aside from sexually charged lads and sandy beaches, Ayia Napa is known for its alluring sea caves. Located on the far southeast of the municipality, they are a bit difficult to locate and visit without a car.

Look for buses headed to Protaras (like the 101/102), but be prepared to walk down to the cliffs. There are tours as well that can take visitors directly there, but they can be expensive.

These cliffs and their caves are rather impressive. I was in much better spirits and happy I came with Nina after exploring them. Nina was happy too. Again, navigating and finding the little road sign that points people down to the site is not the clearest, so friends/multiple eyes are useful to find it (and also for taking stunning photos).

These caves are a great place for instagram shots if that is one’s interest. The caves themselves however are inaccessible without a little bit of scaling the sides of the cliffs to get down into them.

This journey can be a little dangerous, and there is some wetness and algae slippage risk. Be careful.

Regardless, many people do make the climb down, so the iconic solo shot (inside the main cave) really is just a result of being the head of the line after a bit of a wait.

Nina and I skipped the queue and found our own spot for some nice pictures. Again, proceed with caution. Do not die for photos …

A beautiful and charming aspect about Ayia Napa that one will witness after visiting the caves is the dichotomy between the populated and rural areas of the town.

There are rich fields and some less-kept plains outside the touristic centres, which are beautiful during sunset. It is a reminder that much of the development in Cyprus is rather new. The island has deep historic roots in agriculture and as a birthplace of civilisation.

Nina and I had a pleasant walk back to the main road after some ice cream from a truck by the cave to catch the 101/102 returning bus (but ended up using a cheap taxi (€2 each)), marvelling at the much missed natural backdrop along the way.

It was, again, a nice contrast to the night before with all the piss on the dance floor.

Placid nature was not something we saw in Paphos or for most of our time in Ayia Napa. We appreciated the change.

Ayia Napa did not exactly meet all our expectations, but it did exceed some of them for which we were unprepared. We did not expect such natural beauty, and the cheap alcohol prices did delight as expected. Learning about Ayia Napa’s reputation was also a good chuckle after the fact. However, I do not think I would return personally. I just do not think I fit the key demographic, which also means the key attractions are not for me either really. If I ever decide to become a full-fledged lad, then perhaps Ayia Napa will beckon again.

One thought on “Ayia Napa: A Cypriot Jersey Shore”