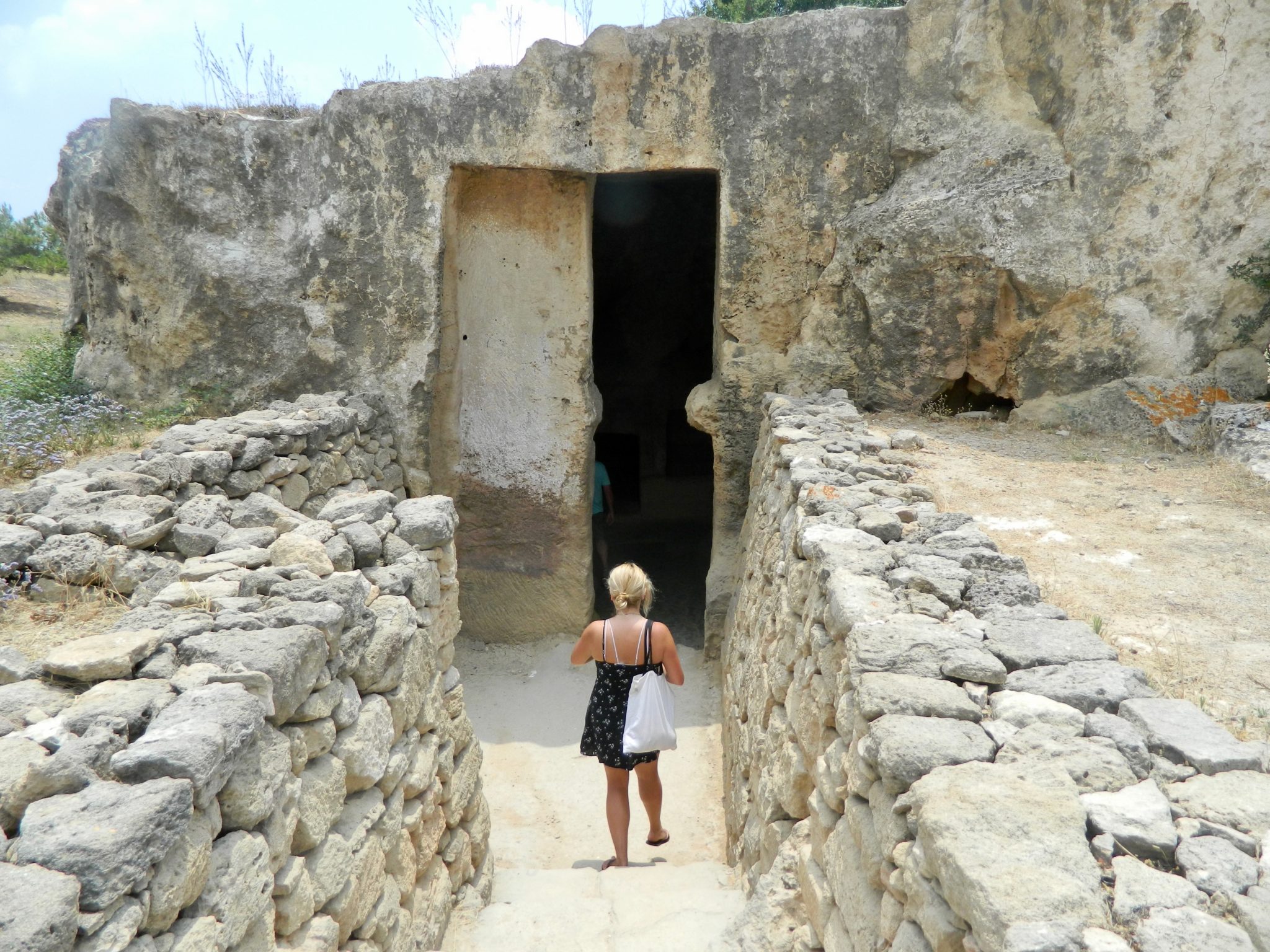 Welcome to Cyprus: a contentious little country in the Mediterranean.

Nina and I arrived to the island quite late in the evening to the western city of Paphos on the culturally Greek-side. The other, which is currently occupied by all sense of the word, is Turkish. However, only Turkey really recognises this status. The UN (and everyone else) … not so much …

This divide does make border crossing something to think about when arriving to Cyprus. Do not fly into the north expecting a fast exit to the south.

In general, getting around Cyprus can be a little difficult. Most people drive, and public transportation can be crowded and infrequent. There is a city to city bus system, but it can be stressful to catch. If one can rent a car, I would recommend it. However, it is possible to get from point A to point B on the island using these buses.

To get everyone up to speed and set the scene, Cyprus is an EU member with a rather lax policy for citizenship. Like many island nations, it seeks to bring in money for increased development through foreign investment. It just so happens that when people invest in Cyprus, they get a fast track to EU status. For this reason, many Russian and Ukrainian citizens frequent the island, not just for tourism, but the potential to receive citizenship, granting them access to the greater EU.

Unsurprisingly, tourism is pretty big for such a small place. The island mostly attracts British and Russian tourists (one will note the multilingual English-Russian-Greek menus) escaping their countries respective grim climates. With its stunning beaches and low prices, it is easy to understand why Cyprus is such an attraction.

As a result of this trend, people do not tend to budget or backpack through Cyprus. I mean this in, hotels outnumber hostels by an unfathomable degree.

Paphos itself is not just known for its beaches, but also its history. Named ‘the Tomb of the Kings’, the city houses a UNESCO recognised necropolis ‘city of the dead’ with a debated history spanning from the 4th century BCE. There are also more ruins in the Kato Pafos Archaeological Park closer to the main tourist strip, which are objectively a bit less impressive than the subterranean tombs in the north.

But for this accommodation review, we begin our tale, as we arrive at the only discernible hostel in Paphos, along a somewhat seedy strip of bars, at 11PM to check in after a long day of travel from Italy …

This is where I heed my warning about Trip Yard Hostel Paphos: a small chain on the island. Check-in was awkward at best. The receptionist was nice, but a bit aloof and we learned about some unique policies.

For one, drinking was not allowed inside the building (despite a very drunk man hanging out in the lobby). Also, we would need to pay to keep our things safe in their locked backroom. This policy seemed odd, as we had our own locks. But, as it turned out, there were no public lockers anywhere.

The price was very cheap, so we chalked it up to that.

However, when we were shown our room by a very nice Greek caretaker, we learned a few more things:

Needless to say, Nina and I were a little frazzled. We have been in some poor hostels before, but nothing like this. There was a random mattress against the wall, and the beds were possibly the lowest quality ever. With no A/C in a 30°C climate, I could not sleep. So, I ventured out into the courtyard to work on some audio through the night.

No Rest for the Wicked

Headphones in, I was still able to eavesdrop on some of the other guests’ conversations. It was … illuminating. Essentially, the low low price kept them here, and to be frank, many of them were doing some soul searching on their parents’ dime, so it did not really matter where or for how long they stayed. My favourite addition to the menagerie was this Swiss-Spanish Maluma knock-off who proclaimed he was often mistaken as British in London when he was DJ-ing because of his lack of an accent while he spoke like Antonio Banderas.

It was then that I decided to do a little research into this place and came across many a review online. After skimming, I noticed something very odd.

There were many 5-star reviews that read very similarly. However, they were all written in different languages. Luckily, being multilingual, I could read them. And, they were the same verbatim.

We were dooped. This place was a scam.

As I came back in to tell Nina, a random dog ran into the building and the receptionist (who was described in one of the not-so-nice reviews) reassured me that the dog was no threat. Okay.

After little disagreement, Nina and I agreed that we had to leave. Aside from the squalor, and heat, and clientele, and rules, there was also a security issue. None of the doors had locks including the outside one. We were supposed to use the ‘secret door’ if we wanted to come back late in the evening. What the fuck.

At least there was wifi. We were able to find an apartment to rent about a kilometre away, which we sprung for!

After giving an excuse that our (non-existent) friend in Limassol (another Cypriot city) could host us, we asked for an early check out. The staff obliged and refund us the money, but did ask if there was anything wrong and if so, they would want to know how to improve the hostel.

We kept our mouths shut. In reality, we might have told them not to lie on the internet and renovate, everything. But, that would mean staying there 2 minutes more than we had to. Also, the feigning of ignorance is easy to spot; they know the company and place they keep.

We then took our things and trekked up to Valentinos Apartments, closer to the main square of Paphos.

In the blistering heat after a horrible night sleep on Nina’s part and an all nighter on mine, we arrived at an air conditioned, welcoming lobby with friendly Valentinos to guide us to our one bedroom rental with a balcony. For about the same price, we upgraded to a stunning HQ for our time in Paphos. Fan-fucking-tastic. And, although farther from the nightlife (which we did not really partake in anyway), it was equidistant to Lighthouse Beach.

The bedroom was lovely and chilly with the air conditioning, and we were offered a beautiful stove as well for cooking. The apartment complex has a small Eastern European specialty store attached to it, and there is a supermarket close by too for more produce. One can save some money and dine in easily at Valentinos!

The shower was also spacious and without the grime of the communal one at Trip Yard Hostel.

We learned a valuable lesson. Depending on the tourist clientele, the best type of accommodation changes in Cyprus. As Paphos is a rather family-centred tourist destination, youth hostels are not a thing. If one finds one, it will likely be run cheaply.

Another aspect that was lacking in Trip Yard was the hospitality of Greek-influenced culture. The way Valentinos welcomed us and made sure everything was alright was different than the reception at Trip Yard by the Russian and Ukrainian staff. The Greek caretaker was indeed friendly, but that was overshadowed by everything else and he was not the one running the joint.

Simply put, go where the people are happy and seem happy to be there. Valentinos himself had friends in the lobby chatting who were equally friendly to us! He would leave later than we expected in the evening and as we passed him in his car, he would tell us good night and other pleasantries.

In sum, we recommend if anyone ventures to Paphos, stay at the warm (in demeanour; the A/C works fine!) and spacious Valentinos and avoid Trip Yard. The only advantage (possibly) to the latter is its relative location to the touristic centres. However, when it comes to safety for oneself (Nina was constantly hit on by random men there) and one’s belongings, the hostel is severely lacking.

Valentinos was also rather close to the bus stop (OSYPA Terminal) we needed to head to in order to get to Ayia Napa. All in all, the upgrade was beyond useful for our future plans and present comfort at the time. Choose wisely.

Next, we are off to Ayia Napa, which was … an adventure of its own! Get ready for more recommendations, madness, and misadventures coming from the east side of the island. Stay safe and travel often!

One thought on “The BnB Tea: Booking a Place for Cyprus (Paphos)”

55. It’s best not to be a picky eater when traveling, and personally, I think this is true about life in general. It just makes everything so much more complicated. And, complications during travel should be avoided even if they are small. It’s not the end all be all though.